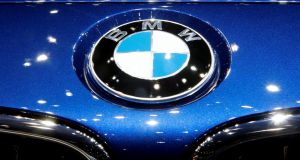 BMW operates from 12 locations in the Republic, with two new showrooms due to open later this year. Photograph: Reuters/Arnd Wiegmann/File Photo

Premium car giant BMW’s Irish operation saw operating profit rise by 13 per cent to €3.6 million in 2018, despite a 7.7 per cent drop in its new car registrations and a 2.6 per cent decline in turnover.

Accounts for BMW Automotive (Ireland) Ltd, show it recorded turnover of €160.5 million for 2018, down €4.3 million on the previous year.

The directors blamed lower customer confidence “stemming from ongoing Brexit uncertainty, together with changes in used car values which resulted in customers requiring more equity than normal when trading up to a new vehicle”.

The changes to used car values is a reference to the rise in the number of second-hand UK imports coming across the Border due to the fall in the value of sterling against the euro following the UK Brexit referendum.

Despite the drop in turnover the company paid a dividend of €6 million to its parent, BMW in Germany. Pre-tax profit was €3.9 million, up from €3.5 million in 2017

Staff costs came to €2.62 million, with 23 people employed in the Irish operation during the year. Directors received emoluments totalling €356,000.

Since the accounts were filed, BMW Ireland has restructured its dealer network and internal operations, with several senior managers departing the company. Two dealers left the network – Martin Reilly in Sligo and Murphy and Gunn in Dublin – although the total number of BMW outlets stayed the same, with two of the remaining dealers opening new outlets. Martin Reilly Motors also remains as an authorised service and warranty provider with a contract running until October 2023.

BMW currently operates from 12 locations in the Republic, with two new showrooms due to open later this year. At the start of this year, managing director Paulo Alves moved to become head of BMW’s motorcycle division in the UK. He has been replaced by Kevin Davidson, BMW UK’s former retailer development director.

A spokeswoman said: “In 2018, the retail network made a significant investment of €37 million, which included the rollout of new infrastructure at all our dealer outlets to support the sales and servicing of our growing electric car fleet under the BMW i sub-brand.”