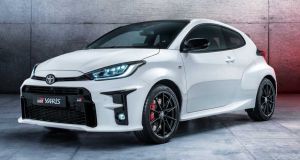 Toyota is planing to up-end the hot hatch world with the launch of the aggressive-looking GR Yaris early next year, and Irish rally driver Chris Meeke has been given a (literal) spin in the new car - even though he’s now officially out of a drive at the Toyota team (although he will act as a test and reserve driver this year), and admitting that his time in top-flight rallying may now be over.

Describing the GR Yaris as: “So much fun,” Meeke went on to say that “I think a lot of people will be waiting for this.” Toyota’s other world rally championship drivers were also let loose in the car, with Ott Tanak (who’s actually leaving the team for Hyundai next year) saying that: “It’s a very easy car to drive” while Jarri-Matti Latvala possibly spoke for us all by saying: “It’s the sort of car what you want to have.”

The GR Yaris has also been driven by a ‘TGR Master Driver, code-named Morizo’ who actually turns out to be Toyota’s chief executive Akio Toyoda, a noted car-nut amongst global CEOs. “Personally, there’s nothing I like more than the smell of gasoline and the sound of screaming engines” said Toyoda. “This GR Yaris brings out the wild-side in a gearhead like me.”

Toyota has certainly skewed more towards making high-performance road cars of late, not least the 345hp Supra sports car, but it already has form when it comes to the Yaris. In 2017, we saw the first-ever car to wear the Gazoo Racing (GR) badge, and it was the Yaris GRMN (full title: Gazoo Racing Meister of the Nurburgring). Silly name, silly car, silly fun - feeling like a 1990s Touring Car in miniature, the GRMN Yaris was ballistically good fun to drive, if rather unrefined and crude.

The new GR Yaris will be quite a different beast. Indeed, the spec reads like someone shrank a Lancia Intergrale, given the engineering extremes to which Toyota and Gazoo Racing have gone.. It also won’t have the slightly insane 1.8-litre supercharged petrol engine from the Yaris GRMN because there isn’t a hope of getting that through current emissions tests. Instead, the GR Yaris gets a new 1.6-litre turbo three-cylinder engine (three-cylinders because that’s the homologation limit for R5-spec rally cars from next year). Power? 261hp, allied to 360Nm of torque. Good enough, says Toyota, for a 5.5sec 0-100km/h sprint and a top speed of 230km/h.

That engine will drive all four wheels through a unique drive system. Instead of a traditional centre differential, the Yaris uses a ‘clutch-pack differential’ at each end. This is lighter, and it allows more flexibility within the system. The drivetrain will come with three modes - front-biased (60:40) for normal road driving; rear-biased (30:70) for ‘sport’ driving; and a track and stage mode that locks it into 50:50 front:rear. It will come only with a six-speed manual gearbox. And a proper handbrake for, er, careful parking manoeuvres. Yes. Those. There will also be an optional ‘Track Pack’ that brings with it twin Torsen differentials for extra traction, tweaked suspension, and forged 18-inch alloy wheels with high-performance Michelin tyres.

The torsion-bar rear suspension of the standard Yaris has also been binned in favour of a much more expensive double-wishbone setup, and the tracks are much wider than standard. Toyota has actually conjoined the front-end of the new Yaris chassis with the rear end of the old one to allow for this.

The body’s wheelarches are boxier and much more prominent (following the aerodynamic styling of the rally car) and the front air intake and bumper are both huge and low-set. It’s going to create a visual stir, that’s for sure.

It’s also structurally very different from the standard Yaris road car, at the behest of Tommi Makinen himself. The roof is a full 91mm lower than standard, and many of the body components are now made of carbon-fibre and aluminium, keeping weight down to 1,280kg.

On sale? No details yet. Price? Definitely no details yet, but this is far more than a mere rival to the likes of the Ford Fiesta ST and VW Polo GTI, so expect a pretty chunky price tag when the GR4 eventually arrives in Ireland.