Helen O’Rahilly: Buying my first Dublin home won't be the same without the domestic goddess of the family casting her verdict 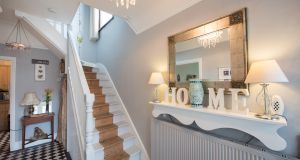 I’m buying my first Dublin home. I’m waiting for an exchange date and hope to move in next month. After 30 years in London, it’ll be my third house purchase. It’s a renovated, extended old redbrick in “turnkey” condition: immaculate, everything top spec.

But there’ll be something missing when I step over the threshold: my Ma - Emer, won’t be with me. She died last summer, so I won’t have the pleasure of her casting a beady eye over every surface, pulling open each drawer to check if it’s “tongue-in groove” (“the mark of real furniture”). Yet I fully expect to hear her in my ear, saying “I wouldn’t have put that, there. . .”

Emer, you see, was my original domestic goddess. She would have been classified as a Homemaker in the census. That word doesn’t come close to what she was, what she did. A woman who could reset a fusebox, put out a chimney fire, design and grow a 60ft (18m) garden, complete with ornamental pool and Koi carp (she didn’t reckon on the circling herons of north Dublin who had them for dinner in the first week). She was a powerhouse of design and creativity.

In the 1970s, she wanted my dad Paddy’s chemist shop to be repainted in Kapp & Peterson Green, after the flat dark green front of the famous pipe shop then on the corner of O’Connell Street. When a painter instead delivered a dayglo shade of Vibrant Leprechaun, Ma cried. Dad’s customers were in stitches, sending him a massive card addressed to “Paddy’s Green Shamrock Shop”. It was her first and last design faux-pas.

Ma and her sister moved to the coast of north Co Dublin after Dad died. She designed the layout of the new house and designed its interior: muted greens and hand-made Spanish tiles for the kitchen splashbacks; their late sister Imelda’s Connemara landscapes were hung on the plain, pale green walls of the living room. Then in her mid-60s, this house was Ma’s experiment, the first house that was her’s alone. The sandy soil, too, was a chance to grow new plants and shrubs.

In the years since, we’ve had Ma’s “stencilling period”: if it didn’t move it was stencilled. I was tempted to lock the bedroom door at night lest I woke up with a recurring Greek motif over parts of my exposed body.

What didn’t change was her absolute distrust of all objects designed to make life easier. The brother and I bought the sisters every time-saving device going:

Microwave - “I’m not using that. Who knows where those waves are going!”

Dishwasher - “Why would I want that? Using up all the electricity.”

Dryer - “Are ye trying to bankrupt me? The wind here is grand and pure”.

Even in 2019, Ma’s 1970s Ercol oak trolley still had pride of place in the kitchen: a Brother sewing machine sat on top. Unused since the mid-90s, if I even dared suggest we could donate it I would be met with a matriarchal death stare’. She’d remind me curtly that that machine made my debs dress, my Trinity Ball dress, every set of curtains in the house. It was her ancient mechanical pet.

She grudgingly allowed me to replace the gas hob. I’d seen too many swaying dressing gown sleeves inches from roaring flames. I installed fire alarms, carbon dioxide monitors. Home for a weekend I’d do a safety check: “Ma, where are the batteries for this alarm? I put them in weeks ago”.

“Ah, it was beeping so I pulled them out”.

How immolation or suffocation didn’t happen is a miracle.

Then there was the new, senior citizen friendly bathroom. I brought Ma to a showroom so she could take her pick: a high-level loo, paddle handle taps, an ergonomic shower. She regarded all options with disdain.

When work began, I flew back to oversee it. She dispatched me to Woodies for earplugs: “There’s never been such an intrusion in this house!”. Feisty as ever at 91.

After a week, up she came on her stairlift. A beautiful modern bathroom lay before her. “It’ll do,” she said.

Did she use it? No.“It’s too cold in here” she protested.“It’s July, Ma! David Attenborough would be stalking gorillas in this heat!”. She never used it, preferring her slow, daily ritual of sink and soap.

I know I’ll run my fingers along the drawers in my new home, tongue-in-groove. She’d approve.

Walk for the Weekend: Rambling on the white sands of Inishbofin, Co Galway
6