Can my neighbour and I claim the waste ground between out homes?

Property Clinic: The area is overgrown with weeds and briars and is infested with rats 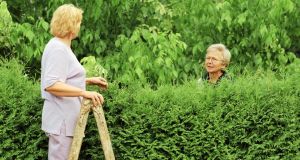 Neighbours should engage a surveyor and solicitor before claiming waste ground between their homes.

I wish to sort out a problem concerning the remnants of an old hedge, which runs along the centre of a waste strip of ground between the wall at the end of my back garden and the corresponding back garden wall of the property backing on to mine.

The houses on my side were built in the 1970s and those backing on to us were built in the 1980s. The strip of ground, which is about three to four metres in width, between the two back garden walls, is overgrown with weeds and briars on each side of the hedge and is occasionally infested with rats.

My neighbour, ie the owner of the property backing on to me, has asked me to assist him to clear the area out and has suggested dividing the strip of ground between us.

My questions are, who is the owner of this of waste ground, and, can we divide it and include it in our gardens?

There are numerous instances of the situation you have outlined in urban housing developments. The hedge you describe is likely to have been the boundary hedge between two landholdings or farms prior to the construction of the two residential developments. It would have been convenient for the respective developers to retain the hedge because, (a) it was a party boundary hedge, and (b), it was more economical to construct the rear boundary wall on stable ground a few metres from the hedge, in each instance, rather than on ground that would have been disturbed by excavation for removal of the hedge.

However, it is highly unlikely that the developers, if they are still in business, would claim any interest in the waste ground or accept any responsibility for maintenance. Many house owners simply extend their gardens into such areas.

If you want to avoid having to clear it out repeatedly, dividing it between you, and incorporating it into your respective gardens, may be the best option. If you do, I would advise that you do this formally, otherwise it’s likely to raise questions and possibly create problems in future if you wish to sell your house.

You will need legal advice. In order to confirm your existing boundary, you should initially obtain your deeds and, if your property is registered, your Land Registry folio and map. You, and your neighbour, should agree on a proposed division line on the waste ground and engage a chartered geomatics surveyor who will survey the area and map your proposals.

He/she will examine available ownership records, including the registration status of the waste ground, and, if subsequently required, prepare a map for registration. You should present your surveyor’s findings to your solicitor who will check the title(s) of the waste ground and advise on the best course of action. One option may be to incorporate the agreed portion into your back garden and claim adverse possession in due course.

Patrick Shine is a chartered geomatics surveyor, a chartered civil engineer and a member of the Society of Chartered Surveyors Ireland (SCSI), www.scsi.ie