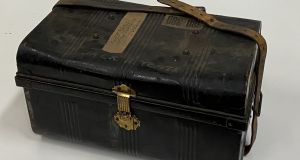 2019 has been quite the year for Jack Butler Yeats. After the recent Whytes and Christie’s sale at the RDS where a new world record was set for the artist when Reverie achieved €1.4 million, some interesting Yeats offerings will feature in Fonsie Mealy’s Important Sale of Rare Books, Literature Manuscripts and Sporting Collectibles on Tuesday, December 10th at The Talbot Hotel in Stillorgan.

A trunk full of memorabilia was discovered by the Yeats family in recent years, after the artist had placed items in the Bank of Ireland vaults at some stage in the early 1950s.

The old battered brass bound Victorian trunk painted with lettering Jack B Yeats (€300-€400) held what the auctioneers are calling Fifty Years of Love.

The wonderful collection is testament to the devotion between Jack and Cottie Yeats, and includes the pigskin and silk wedding shoes that Cottie wore, along with the floral hairpiece and handbag she carried on the day she married Jack in 1894.

Their wedding rings inscribed “Christ alone made us two one” and “Heart content cannot repent” feature with a friendship bracelet with the word “L’Amitie” along with a gold locket “From Jack to Cottie with 50 years love”. Cottie died three years after this locket was gifted to her (€4,000-€5,000).

In addition to the Yeats collection is a unique, miniature handwritten book by Seamus Heaney: Mad Sweeney’s Praise of Trees, which Heaney is said to have gifted to a friend (€3,000-€4,000) a collection of 28 first edition signed books by Cormac McCarthy which vary in price from €400-€3,000 and Celtic Wonder Tales by Ella Young, signed and illustrated by Maud Gonne (€1,000-€1,500.)

There is also a Jack Butler Yeats pencil portrait of the old Fenian John O’Leary, who is immortalised in the William Butler Yeats poem September 1913: “Romantic Ireland is dead and gone, it’s with O’Leary in the grave”, (€600-€700.)

Judging by the contents of this trunk stored for over 50 years in the old Bank of Ireland vaults, romantic Ireland is alive and well and testament to the true love and friendship between Jack and Cottie Yeats. See fonsiemealy.ie

Chinese new year: celebrate the Year of the Rat with dumplings
5

‘He was some man’: Shane’s journey from care child to fearless activist
8