Going, going, gone: the top art and furniture sales of 2019

From Chinese ‘sleepers’ to a record Yeats, it has been a busy year in Irish auction rooms 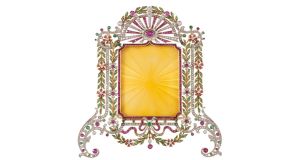 From Ernest Shackleton’s sleigh and a set of gold teeth, to a rocket launcher and a stuffed baboon, 2019 has been an interesting year in the Irish auction rooms. New records were set for works of Irish art, and a trend for vintage jewellery emerged, as did an interest in taxidermy. Here are some of the highlights of the year.

In July, a small Chinese lacquered box sold though Mullen’s in Bray for €15,000. However, after multiple attempts to secure payment, the Qing Dynasty box was relisted in a subsequent sale at €10,000-€15,000 and sold for €40,000 during a bidding war, according to Stuart Purcell, who joined Mullen’s this year to head up its new collectables department.

A Fonsie Mealy sale at Oxmantown Mall in Birr, Co Offaly, last March featured a tiny German marquetry box which originally came from Castletown Cox and now resides in Mexico after a bidder paid €36,000, with premiums, VAT and transport costs on top of this figure. It had been estimated at €1,500-€2,000.

A Ming vase discovered at a routine valuation in Blarney achieved €610,000 – €490,000 over its estimate – through Sheppard’s of Durrow, making the piece one of the most discussed items of the year. Sheppard’s also had another sleeper during the year, in the form of two small Chinese bowls that sold for €100,000, far outstripping their €8,000-€12,000 estimate.

Curious collections also fared well in the auction rooms: 11 pieces of Russian Gardner porcelain sold for a total of €47,500 at Adam’s, quadrupling the pre-sale estimate, and a new world record was set for a collection of postcards at the Sean Kearns Collection, which sold for a combined €130,000 through Whyte’s.

Meanwhile, two of the oddest items to enter the Irish auction world this year were a collection of gold teeth, for which John Weldon secured €480, and a rocket launcher used in the troubles which sold for €10,000 through Whyte’s (€4,000-€6,000).

On the international stage, a little bell owned by the late singer and poet Leonard Cohen – who acknowledged his love of WB Yeats, as a result of being raised by an Irish nanny – achieved a whopping $81,250 ($8,000-$10,000).

A very rare 1880s bottle of Cassidy & Co Monasterevin whiskey achieved €23,000against a reserve of €5,000-€10,000 through Victor Mee. It is one of two bottles known to exist and the second resides in the Irish Whiskey Museum. Two rare James McKendry of Ballymena Importers of Demerara and Jamaica Rum advertising mirrors sold for over €4,000 each (€1,200-€1,800) also through Victor Mee.

Notable lots of Irish interest to sell abroad (English sales prices include buyer’s premium) were: Ernest Shackleton’s sledge from his Nimrod Expedition €163,718 (€67,000-€110,000) and The Bridge, by Irish-born artist Stanhope Forbes which achieved €108,941 through Bonham’s.

Three late 18th-century sketch books by Sophia Charlotte Haldimand achieved €10,000 (€200-€400) in less than a minute at a Sean Eacrett sale of the contents of Griesemount House in Co Kildare, while Sketches of India sold for €3,100 against a reserve of €80-€100 through Lynes and Lynes.

In keeping with the year that appears to be all about Jack B Yeats, a small oil, The White Jug – discovered in the Bank of Ireland vaults – achieved €18,000 against a reserve of €3,000-€5,000 through Fonsie Mealy.

“The day of old men with hats climbing under a piece of furniture with a torch to inspect its underside are gone – they’re all dying off and their knowledge with them,” says auctioneer Damien Matthews, who goes on to point out the exception: “In cases of the truly special piece of Regency or Georgian furniture, then it’s vital that all is as it should be as regards condition and authenticity.”

An Irish Georgian mahogany dining table by the Dublin firm Williams & Gibton sold for €50,000 at Adam’s Townley Hall sale in October, making it the most expensive piece of furniture to be auctioned this year. In the same sale, a George III giltwood mirror made €22,000, while a pair of Irish George III side tables fetched €14,000.

“This year’s sales show the high interest for signed pieces from the 1940s to the 1970s by jewellery houses such as Cartier and Van Cleef & Arpels. The results achieved this year are in some cases 10 times higher than what the same pieces achieved 15 years ago,” according to Claire-Laurence Mestrallet of Adam’s.

John Weldon of Temple Bar agrees: “One of the trends I’ve seen this year is the level of interest in branded jewellery; a diamond and kunzite cluster ring by Tiffany and Company sold for three times the estimate, achieving €1,250, and strong watch brands such as IWC, Rolex, Cartier, Omega and Jaeger Le Coultre are doing really well. Quality sells and that trend is sure to continue.”