Revealed: The most-viewed properties of 2019 on myhome.ie 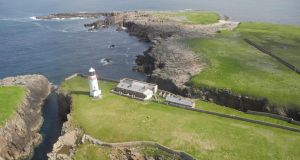 Top of the props: Rathlin O’Birne Island, whose sale includes two lighthouse keeper’s cottages but not the lighthouse

The poet John Donne may have been right in observing that no man is an island, but plenty of people wouldn’t mind living on one, judging by the five most-viewed properties on myhome.ie in 2019.

Whether it’s the daily grind of work and the commute to and from it, the enervating flow of news on the latest twists and turns of Brexit, or the irrational Twitter rants of Donald Trump, the desire for a life of splendid isolation would appear to have been to the fore among property hunters and watchers this year. Indeed, the top two spots in its top five have been claimed by islands along the Wild Atlantic Way.

In a reflection of demand in the wider market, and among prospective first-time buyers particularly, developments in Dublin took third and fourth place. The upper end of the market is represented in fifth place, which goes to a sprawling 18th-century country house on 17ac in Co Kildare.

Angela Keegan of Myhome.ie says, “It’s not surprising at all to see trophy properties make the most-viewed list. After all, we all like to dream, and these properties certainly attracted considerable press coverage when brought to the market. On a separate note, it’s interesting to see new-homes schemes aimed at first-time buyers also making the list, something which reflects the strong first-time-buyer activity in the market at present.”

1. Rathlin O’Birne Island
Glencolmkille, Co Donegal
Taking first place, with 51,533 views, Rathlin O’Birne Island went up for sale in June, at a guide price of €275,000, with DNG Dorrian. The property, which has already gone sale-agreed, comprises two former lighthouse keeper’s cottages set on about 2.8ha (about 7ac) of grassy headland. As challenging a prospect as that sounds, the property is connected to the main section of Rathlin O’Birne Island by a sea arch that is bonded on each side by stone walls, creating a sheltered walkway to the main access point on to the island. Developed between 1847 and 1856, the cottages are derelict and in need of complete refurbishment; the remotely controlled lighthouse, which is owned and managed by the Commissioners of Irish Lights, remains fully functional. Rathlin O’Birne, 5km off Malinbeg Head, is Co Donegal’s most westerly point. The island is a short boat trip from the mainland villages of Malinbeg and Teelin and slightly farther from the fishing port of KiIllybegs.

2. High Island
Claddaghduff, Co Galway
The runner-up spot goes to High Island, which is for sale through Spencer Auctioneers with a guide price of €1.25 million. Ardoileán, as it is also known, has been viewed 30,889 times. Located 3km off the coast of Connemara, close to Claddaghduff and Inishbofin, the island extends to 32ha (80ac) of mostly island grazing, along with two natural freshwater lakes. There is an abundance of bird life on the island, including a pair of peregrines that breed each spring. In the autumn barnacle geese arrive from mainland Europe and winter on the island. In terms of human habitation, the foundations of a monastery credited to St Féichín point to a population of between 50 and 70 people on the island in the seventh century. In the late 18th century the island was owned by the Martin family, one of the great tribes of Galway, and in 1794 Richard Martin (better known as Humanity Dick) leased the island to John Bodkin. There was a period of copper mining on the island around 1820, but this lasted only a couple of years. Between 1969 and 1998 the island was owned by the poet Richard Murphy, a resident of Inishbofin. Today the island is protected as of special conservation interest for its barnacle geese, fulmars and Arctic terns. The monastery, a national monument, is owned by the State and maintained by the OPW, which requires access to the island.

3. Meadowbank at Miller’s Glen
Swords, Co Dublin
The dreams of those looking for their first home are borne out in the 25,304 views for Meadowbank, the latest phase of three- and four-bedroom houses at Miller’s Glen, in Swords, in north Co Dublin, since it was brought to market by Sherry FitzGerald on July 31st. Priced between €297,500 and €455,000, the 85 A-rated homes at Fairbrook are the most recent tranche of the 1,000 houses that Gannon Homes is set to deliver as part of the wider Miller’s Glen development. The Swords scheme is well located, immediately opposite two new primary schools (Swords Educate Together and Gaelscoil Bhrian Bóroimhe) and a neighbourhood centre that is under construction. The development is 3km north of Swords main street and within a 15-minute drive of Dublin Airport.

4. Newpark
Adamstown, Co Dublin
Since going live on myhome.ie last year, all 42 of the three-bed houses in the latest phase of Newpark, the new-homes development being delivered by D-Res Properties at Adamstown in Lucan, in west Co Dublin, have been sold. Details of the houses, which were priced within a first-time-buyer-friendly range of €315,000-€345,000, were viewed online 18,783 times. Savills’s new-homes division still has a cancellation list for those interested in securing one of the A-rated houses. Located within the wider “new town” of Adamstown, Newpark is situated between two large proposed parks to be known as Airlie Park and Tandy’s Lane Park.

5. Osberstown House
Naas, Co Kildare
Although it’s the proverbial world away from the relative affordability of the new-home developments in Dublin and the commuter counties, Osberstown House, in Naas, Co Kildare, has proven to be almost as popular on myhome.ie, with 18,334 views registered since September. Dating back to the 18th century, the property, which has been “tastefully restored by its current owners”, is being offered for sale, along with its estate of almost 7ac (17.2ha) through Goffs Property; the price is available on application. Situated behind cast-iron security gates and at the end of a tree-lined avenue, Osberstown House is a three-storey-over-basement period property extending to 1,115sq m (12,000sq ft). The residence includes seven bedrooms, seven bathrooms, entrance hall, inner hall, drawing room, dining room, kitchen, sunroom, conservatory, ballroom, billiards room, gym, wine cellar, bar and boardroom with roof garden. The sale of the property also includes a mews whose two self-contained units share an entrance. The lands, meanwhile, are laid out as paddocks, formal gardens, and small and large walled gardens.