Thinking of adding a garden house? You might have to join the queue

As Dublin City Council considers garden homes, firms that supply them are booming 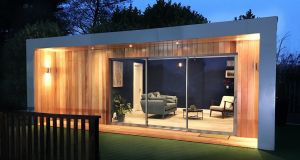 As Dublin City Council considers allowing the construction of timber houses in gardens in an effort to alleviate the housing crisis, garden house suppliers are finding themselves inundated with requests. Councillor John Lyons, who is putting forward the motion, proposes amending the planning laws to make it easier for temporary residences to be built in gardens.

John Sherry, director of Gardenrooms, is one of several suppliers that welcomes the fact that the council might allow structures in back gardens to become full time homes. “This is already commonplace in cities all around the world”, he says, adding that he’s had many enquiries for living purposes but can’t sell them as being habitable under the current regulations. The regulations state that the area should not exceed 25sq metres, nor should it reduce the existing open space to the rear or to the side of the house to less than 25sq metres. There are also some height restrictions.

You can build a garden room, a property in the garden that is less than 25 sq m in size without planning permission. But under regulations this construction cannot be used as an abode to live in full time however high spec the build and finish.

Small home living is more than a trend. With more and more of us living in the nation’s cities, where land prices are at a premium, an easy-to-assemble garden house is an affordable way to live independently, be it for an adult child or aging parents it gives them a space to call their own. The issue now might be in finding someone to build it for you. One company tha produces modular homes just outside Dublin said it was too busy to comment.

Garden Rooms, based at the Finglas M50 exit, has supplied over one thousand dwellings in its 15 years in business. The timber-frame construction units use the same principal as that used by many housebuilders, owner John Sherry explains.

The interior is insulated and studded with the exterior clad in a cedar that will weather. Each abode is constructed on site so access can be an issue and Sherry has had to turn away business for this reason. If you live in a terraced house, for example, the materials will have to be brought through the property, which may not work.

The units are a maximum 25sq metres in size as that is the maximum size you’re allowed to build in the garden without planning.

It costs about €1200 per sq metre to construct but this price is ex vat and ex services so by the time you factor in partition walls, sewage, electrics, water and broadband, as well as a concrete slab foundation, this size will cost from about €40,000.

At the moment most of the properties are used as offices, teenage dens and gyms. “We don’t sell them as habitable because of the current planning laws,” says Sherry, adding that a simple upgrade of the insulation would see their construction conform to building regulations.

Emergency services access is an issue cited by planners too. Sherry believes that each proposed garden plot be looked at on a case by case basis and suggests attaching the letter “R” at the end of an Eircode to indicate a garden residence has been vetted and approved.

Trevor Watson came across the log cabin concept while on holiday in Holland and now runs his company from his two offices, one in Bridgend, Co Donegal the other across the border in Co Tyrone.

Business is good he says. He has sold about 3,000 units since he started the business about eight years ago and the company is opening a Dublin office in Swords next week.

Sixty per cent of what he sells is flat-pack kits that buyers build themselves. He says he doesn’t know what they’re using them for but judging from the questions clients ask he estimates about 40 per cent are used for habitation.

“Some are to facilitate adult children. Others to accommodate an elderly parent that they want close by but who still wants their independence,” he explains.

His designs are made using 70 ml Scandinavian pine imported from the Baltic States. The most popular residential unit he sells is a two-bedroom flat-pack unit, from about 46sq m in size, which costs about €26,000 for a flat-pack unit, that includes doors, windows and insulation. This unit, which is outside the planning restrictions size, excludes foundation costs. Turn-key, with all the dirty work done, including wiring, insulation and kitchen it will cost about €55,000.  This excludes plumbing costs and sanitaryware.

The units are sold already primed and top coated but will need ongoing maintenance. They need to painted or stained every two years using breathable paints, he explains.

He suggests Dublin City Council looks at the UK model where under UK law the log cabin is considered a moveable structure, a house you can take down and move to another location, and as such doesn’t need planning.

Made from slow-grown Scandinavian pine, Loghouse has sold about 3,000 units since it launched 11 years ago in 2007 selling mainly to Dublin.

The log cabins are made in a factory in Lithuania, flat packed and assembled on site, explains the Bray manager Robert Daukintis. Made using 60ml logs the budget two-bed, style B, unit has an exterior of 36sq m and an internal of 29sq m, which is outside the planning restrictions. The basic shell costs from €13,320. This is currently on sale, reduced by almost 19 per cent to €10,800 in the summer sale which runs to the end of August.

But for this design to be habitable you also need to add a timber frame and block foundation, windows and doors, roof and wall insulation. The unit also needs to be primed. Add assembly and you’re looking at €19,100. This price does not include plumbing, electricity, sewage and broadband, another estimated €10,000, says Daukintis. In total it will amount €29,100.

You get a choice of windows made of laminated, pre-engineered timber; a basic 16mm double glaze option or a 24mm argon gas-filled version that is used in residential homes and recommended if you want to live in it.

Daukintis sees the biggest planning issue as being the external finish of the log cabin. It stands out if building in an area where the majority of the other properties have a typical white render, he says.

It has three showrooms, one a Horkan’s Garden Centre, Glen of the Downs, Bray; a second at Kinsealy Garden Centre and the third at Greenogue Business Park in Rathcoole, all on the periphery of the capital.

No buns, no sauce, no fries, no wedges: How to make the perfect chip butty
9