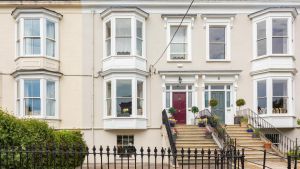 A terraced Victorian house in Dún Laoghaire that was a small private primary school until it closed in 2012 has been completely refurbished by the family that bought it in 2013. St Anne’s Private Primary School – Maeve Binchy’s childhood school – closed a year after celebrating its 100th anniversary. There’s little reminder of its former use, but for a plaque over the original granite fireplace surround in the glossy new kitchen.

The house – built in the 1850s, and a protected structure – has many of its original period details, like rich plasterwork, original fireplaces, sash windows with shutters, polished floorboards and restored anaglypta below the dado rail in the halls.

Many of the bedrooms have feature wallpaper on one wall, there are ornate period-style radiators in a number of rooms, and panelled walls in the livingroom are painted a shade of brown – Farrow & Ball’s London Clay – that contrasts well with ornate white plasterwork.

Ten granite steps from the railed front garden lead to the front door of the house, the second to last on the terrace, near the corner with busy Corrig Road. The livingroom on the left of the first floor has a very deep bay window and a black marble fireplace with pretty inset tiles.

Two of the six bedrooms are at this level. One, a large double behind the livingroom, was probably the original diningroom. The second is a smallish double a few steps down on the first return, with a shower room next door.

There are two more doubles with adjacent shower rooms on the second and third returns. Another double bedroom on the second floor has a mezzanine level with ladder access.

The main bedroom, painted aquamarine, is at the front of the house on the second floor and spans its full width. It has two windows, one a deep bay, and a wide, white marble fireplace: the room may have been used as a drawingroom originally. Its en suite has a bath and double shower with pearlescent tiles.

There’s a separate entrance to the ground floor down steps from the railed front garden, as well as from inside the house.

The understairs cloakroom where children used to hang their coats is now a very chic grey-panelled bathroom. There’s plenty of storage in floor-to-ceiling presses on either side of a short hall.

The modern kitchen floored with cream tiles at the front of the mostly open-plan ground floor has cream kitchen units, a large island and cream polished-granite countertops. There’s a large Aga in the chimneybreast and a wood-burning stove in the family room fireplace. Another small livingroom/den is at the back of the house.

Double doors open from the family room into the tiered back garden: a few steps up from a flagstoned back yard is an area with an artificial lawn large enough to accommodate a six-seater table.

A few more steps lead up to a railed garden, also with an artificial lawn, bordered by old stone walls. There is a large shed at the bottom of the garden.

There is residents’ permit parking on Clarinda Park East.