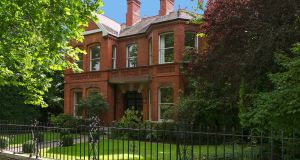 Despite dismal market conditions in 2013, Milverton, Herbert Park, Ballsbridge, Dublin 4 sold at auction for €4.6 million, well over the guide price of €2.75 million

Milverton at 34 Herbert Park is one of Dublin 4’s most coveted redbrick piles, standing on about a third of an acre and bounded by leafy Herbert Park. Ten years ago, the picture-perfect property hit the market seeking €13.5 million, but that price dropped to just €2.75 million by 2013 at the depths of the market’s crash when it was re-offered for sale by auction through Lisney. In spite of the dismal market conditions, Milverton’s enduring appeal was evident when it sold under the hammer substantially over the guide price at €4.6 million to a solicitor in trust for a mystery client.

Two years later, a planning application was lodged in the name of John Marks, a Blackrock-based accountant, to restore and extend the property. Permission was subsequently granted, but the property has lain idle since without any signs of activity. While Marks is the registered owner of the property, it would appear that the beneficial owner is in fact Bernie Gallagher of the Doyle Collection hotel chain. Marks acted as auditor for a number of Gallagher’s companies at the time Milverton was acquired, and the businesswoman has now directly sought the council’s opinion as to whether she requires planning permission to carry out certain repair works to the property.

Milverton was one of the top sales in Dublin 4 during the recession and has inevitably risen in value since being snapped up. Gallagher and her husband John are considered to be amongst Ireland’s savviest investors. They acquired numerous properties at the bottom of the market, including the Bord Gáis Energy Theatre for €28 million and the Temple Chambers office block on Burlington Road for €13.3 million. Some of Gallagher’s siblings and fellow heirs to the PV Doyle hotel empire, namely David Doyle, Ann Roche and Michael Doyle, have each been linked to new homes developments in Dublin on these pages in recent times.