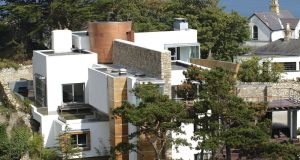 Eddie Irvine’s house in Dalkey which was rented by Matt Damon and his family during lockdown.

A distracting highlight of the Covid-19 confinement was the media excitement around Matt Damon’s residency in the coastal Dublin village of Dalkey for much of its duration. The Hollywood actor and his family only recently departed these shores for the United States. Damon and Dalkey, it appears, was the ultimate Irish lockdown love affair.

Damon had started filming The Last Duel with director Ridley Scott when lockdown occurred, and ended up spending three months in the upmarket seaside suburb. Vowing to return to Ireland, in a radio interview the actor described his Ireland sojourn as being “like a fairytale”.

While they were here Damon, his wife Luciana and their children rented a house owned by former Formula 1 driver Eddie Irvine: “We’ve got this set-up in this incredible place, it’s absolutely gorgeous, we’ve got trees and woods and ocean. I can’t think of any place you’d rather be in a 2km radius of,” said the actor.

From the moment it was built, it was hailed as a house with go-faster stripes; with its private cinema, party-sized jacuzzi and an outdoor pool that meets at an indoor lagoon.

Irvine placed the house for sale in 2003 seeking €6.5million, and then again in 2014 with a reduced price tag of €4million. It never sold and operates as a luxury rental commanding €7,000 per week.

“Eddie had been collecting property since he was young, and while he didn’t drive the specifics, the brief was he wanted views of the water, lots of wow factors, but one particular demand was a swimming pool, as he was a competitive swimmer as a teenager,” recalls Kennedy.

The towering five-storey dream home extending to 511sq m (5,500sq ft) was designed to use the great local resource of Dalkey granite, along with natural materials.

Kennedy describes the planning process as “simple, without a single objection” admitting that he had expected a furore, as it was an unusual design and visible from the surrounding sites before the trees on site had matured.

A bathroom tower extends over three levels; with the master en-suite on one level showcasing a stone bath set in a glass window, and sauna on the ground floor.

Though the level with the bath has full glass panels, with the touch of a button its transparency can be controlled via Priva-Lite switchable glass technology, allowing privacy when in the tub.

The complexity of the overall design meant the build took two years to complete, resulting in a structure that appears to tumble down the site. Remarking on Damon and his family enjoying the property so much, Kennedy says: “It’s a great place for kids, it is nearly wasted on adults.”

Though almost 20 years old, the building has stood the test of time. “ It’s not stylistic in the sense that it follows a particular movement, we tend to take two factors into consideration when designing, that is the site and the client’s wishes, rather than preconceived styles.”

Another dream house of equally unusual design was Kennedy’s design for another Formula 1 giant, Eddie Jordan. Kennedy completed Jordan’s home in Sotogrande in Spain in the 1980s, adding two further extensions over the years. His latest project was a contemporary pool house for Jordan’s home in Wentworth in the UK.

Like Irvine, Jordan is a keen swimmer: “He gets up to swim at 6am every morning, and when it comes to design he likes things that are a bit funky,” says Kennedy.

Jordan wanted a pavilion type building but with a few surprises. It takes closer inspection to actually see the water because the base of the pool is painted a charcoal grey.

Jordan met Kennedy while renting a house in Sandymount that Kennedy had remodelled, and he asked the owner who the architect was.

Jordan and Kennedy soon became friends. Kennedy attended his 60th birthday party in 2018 around the pool house he had designed. “He has a band called Eddie and the Bandits, in which he is the drummer. It’s a well-named band and Eddie really plays the part.”

One of the most challenging projects for Kennedy was another build in Dalkey. “When you have a large, open site, the design can be straightforward, but here we were heavily constrained at the edge of the water. Now it looks as if the house is built into the sea.”

This building features many curves, and is based on circles – which are evident in the stairwell, rooms and glazing. “The client was engaged in every bit of the design and it was a great collaborative approach. For the first time in my life I heard a client say: ‘That’s not mad enough.’”

The primary materials were polished concrete, raw steel and rare timbers. The property has three decks – all of which overlook the bay – and inspiration for the design was the view of a superyacht from a height.

“There had been previous planning on the site, so we had to stay within that envelope, if you like. The Dalkey coast is north-facing so it’s hard to get light in. To counteract this we put glazing into the decks, so the kitchen and interiors would get maximum natural light.”

Kitchen units were painted a pearlescent green “that changes colour depending on the light, you see this used on sports cars quite a bit, so it also helps to reflect the internal light”.

The property also has a slipway on the shoreline so now the owners – keen kayakers – can bring their canoes in and out with little effort.

The exterior cladding is a material called Krion, a new-generation non-porous solid surface. It requires no painting even though it looks as if it is painted a glimmering white. “We used this on a cantilevered building on the Grand Canal, and though it is expensive it cannot house dirt, so the advantage justifies the cost.”

While he has designed many dream homes for well-heeled clients with significant budgets, Kennedy is quick to point out that dream homes aren’t always large, one-off designs that cost a small fortune. Working with Ó Cualann Cohousing Alliance in Ballymun, Kennedy recently delivered homes to buyers on very low incomes but who were also ineligible for social housing.

The brainchild of Hugh Brennan, who, having worked in Haiti and South Africa on building projects for the less fortunate, collaborated with Dublin City Council to provide lower-income individuals caught in the middle to own their own homes through a system of centrally arranged mortgages.

“It was a hugely rewarding project. Previously, these new owners were paying around €1,500 a month in rent. In this system their mortgage is €800, giving them an extra €700 each month to live.

“The international metric says that a third of disposable income should go on mortgages – and no more – but these people were spending two-thirds of their income on rent before this project. We did some research on how that extra €700 is spent; it goes to the local community in places like restaurants and barbers. The knock-on effect it has in the community is very significant.”