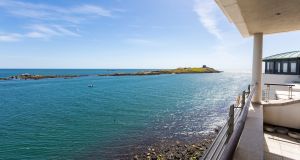 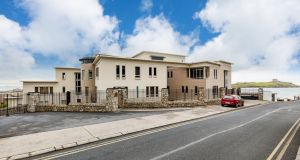 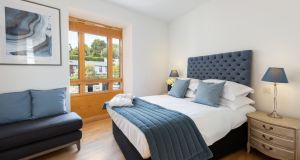 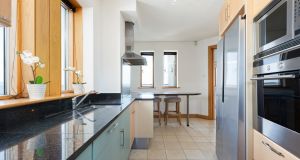 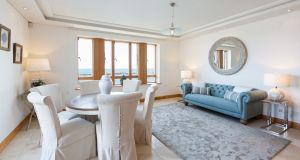 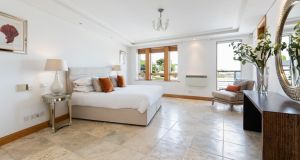 Seaside properties come into their own in summer – though there probably isn’t a time of the year when a three-bed Dalkey apartment with 195sq m (2,099sq ft) and uninterupted sea views wouldn’t grab attention.

Coliemore Apartments, on the sea side of Coliemore Road, caused a stir when the block was built at the start of this century as it replaced an old hotel that had been on the site from the days when Dalkey village was a holiday destination, and any proposals for such prime plots are always the subject of much discussion.

The owners of the duplex now for sale – apartment R – bought from new and it has been a rental for some years now. Selling agent Hunters has staged the property, bringing in smart furniture and even stylishly made beds to show the size of the rooms and the way new owners might decorate them.

The accommodation is spread over two floors with a large hall and landing. The prime rooms are upstairs, although most rooms have what is a key selling point in this property: sea views. Even the landing has a large window looking out to Dalkey Island and across to Howth.

At hall level there is a living room which was originally intended as a formal diningroom as it is adjacent to the kitchen, but is likely to be used more as a casual living room. This room has the first of the apartment’s two terraces. Also on this level is the fully tiled family bathroom, designed at the time as the last word in luxury, with fittings that include a bidet, enclosed shower cubicle and Jacuzzi bath. There are two double bedrooms on this floor, one with ensuite, and both with built-in wardrobes.

Upstairs (the striking-looking, custom-built metal and wood stairs in the communal lobby and in the duplexes are a design feature of this development) the livingroom is a large square-shaped room, about 6m by 6m, with floor-to-ceiling glazing and a stone fireplace. Across the hall, the main bedroom is nearly as large and it opens into a bathroom ensuite and a vast walk-in fitted-out wardrobe.

The spacious rooftop terrace – no staging needed here to see its potential – will make for a spectacular outdoor room.

The kitchen – galley style with a granite breakfast bar – is original and will probably get a makeover by the new owners, who might also work on the bathrooms, not immediately but at some point. There is a lift in the building and this apartment comes with two underground parking spaces. A concierge is on-site – a not-so-common feature of even high-end apartments.

From asking price to refurb costs, buyers in any transaction will need to do their sums, though the €1.1 million price for apartment R is not surprising given its prime location and size. With three bedrooms and plenty of space, it could appeal as much to a family as to downsizers who want to stay in the area. What might give some buyers pause – even at this upper end of the market – is the annual service charge of €8,175.