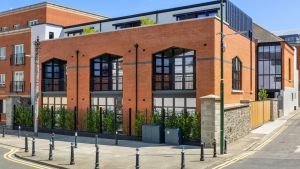 Emmet Long, who has worked on building sites since he was a teen, and business partner Donal Roche of Long Roche Developments have built a small scheme on the former site of the Scholar’s pub on the corner of Blackpitts and Donovan Lane.

Their first new build development was Rhodaville, on Mount Pleasant Avenue, a site extending to 0.197 of an acre, where they refurbished an existing period property on the site and added three new homes, all of which have since sold for between €692,350 and €1.3 million, according to the price register.

The former Scholar’s site is their second development. It was housed in a converted boy’s school, St Kevin’s National School, hence the name of the scheme. They are still completing four, own-door apartments within the original building.

Launching today is a terrace of three, A-rated houses built across the yard from the school. These will suit families with teenagers or indeed couples who work from home. The two bedrooms at entrance level share a bathroom, and could be used for a range of purposes – including rooms to let – as they provide independent living spaces.

The main reception, a fine, big, open-plan kitchen/dining/living area is on the first floor and the master bedroom is set well away at the top of the house.

The properties have been designed by Greg Tisdall of Studio D architects, the firm that did the developers’ first infill site in Rathmines. The design echoes the gorgeous, Tudor-arched openings of the school, using triple-glazed aluminium frames from Munster Joinery to wash the rooms in light and to dial down the hum of traffic from busy, nearby Clanbrassil Street.

The showhouse, number 7, measures 145sq m/1,560sq ft, and is seeking €750,000 via private treaty through agent Lisney. This is less usual in the new homes market (where the sale price is usually set in advance) but agent Stephen Day explains that it’s because there are just three properties on offer.

With interior design by Sinead Considine and Niamh de Barra of The Interiors Project, it is light-filled with large, near floor-to-ceiling glazing in the bedrooms. The living room is triple aspect with two large, arched windows, one with doors leading out to a west-facing balcony. On the third wall is a clerestory window, which brings in light and maintains privacy.

The anthracite grey kitchen is a smart design by Nolan Kitchens, with Silestone counter tops, a Siemens induction hob and De Deitrich oven.

On the second floor is the main bedroom, which is broken down into a dressing area at the top of the stairs, a large bedroom that leads out to a sizeable terrace from which you can just see the top of the Dublin Mountains. The en suite feels very private and has a freestanding, double-ended bath and separate shower.

The properties come with off-street parking behind electronic gates, and are situated just minutes from Christchurch and St Patrick’s cathedrals. St Stephen’s Green is less than a 10-minute walk.