A fine detached house on Rathfarnham’s Hillside Drive has hosted weddings, christenings and even a 100th birthday celebration 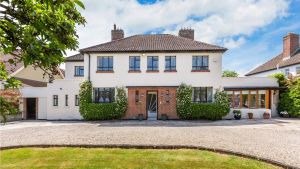 If there was ever a time when we fully appreciated gardens and outdoor spaces, it has to have been over recent months while the country was in strict lockdown.

For the Barnes family, having a garden that sits on 0.3 of an acre was a huge bonus when all eight family members were locked down in their home at Windermere. Hillside Drive in Rathfarnham is one of those tucked-away roads with a fine selection of sizeable properties on large sites. The styles of each can vary greatly and are therefore attractive to would-be buyers with hearts set on a house design of their own.

From the three rooms that open out on to the rear garden, you would be forgiven for thinking that the verdant space stretches well beyond its 150ft (46m) as there is no wall – just woven wire – to separate Windemere’s garden from the fairways of Castle Golf Club, with which the house shares a boundary.

The gardens have given the Barnes family great joy over the past 16 years. “We have had confirmations, christenings, GAA barbecues and even my sister’s wedding here. Up until last year we had chickens running around the place and we used to paint a volleyball court on to the grass when the kids were younger for tournaments,” says Sheila Barnes.

Sheila and husband Paul moved in 16 years ago with Paul’s then recently widowed father Rory, who had called Windermere home for 70 years.

“He lived till the age of 101 and was the oldest member of the golf club. The night before his 100th birthday all the neighbours put bunting along the road, so when we walked Rory up to a celebration in the club the next morning the entire road was done up in his honour. He knew everyone and before we moved in, he sent notes to all our neighbours telling them we were coming to live, so they arrived with flowers and gifts to welcome us,” recalls Sheila.

When the couple and their children moved in, Rory, who was then 86, moved to a spacious self-contained annexe. This contains a bedroom, wet room, living room and kitchen that also opens out on to the rear garden. It has been used as an office by Sheila during lockdown (there is a further office in the main house) and would serve equally well for an older family member or perhaps an au pair.

The main house extends to 365sq m (3,929sq ft) and is set over three levels. There are five bedrooms on the first floor and two further rooms in the attic that are used as additional bedrooms, making this home suited to a large family.

While the detached house with its dual entrances and many bedrooms will be selling points for a family seeking a spacious home in this sought-after location in Rathfarnham, it is really the gardens that are the star attraction.

“It has been amazing during the pandemic, as we have seen birds that you don’t see that often”, including a red kite that has been a regular visitor over the past few weeks. “And even though the golf club is really at the end of the garden it is still very private; all I can see when lying in bed are the canopies of the trees.”

Its location just minutes from the golf course makes it a golfer’s paradise: “My late mother-in-law could actually identify people in the distance just by their golf swing,” Sheila says.

With some of the Barnes children ready to fly the coop, the family are downsizing and have placed Windermere on the market through Lisney seeking €2 million.

Why are there so many angry dads?
10