What can you can buy for €129k in Spain, Turkey, Italy, France and Co Mayo?

Take 5: Period homes in France and Italy, sea views in Spain and Turkey, or a Mayo bungalow 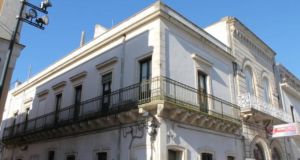 Gerry Rowland Auctioneers is seeking €129,000 for this five-bedroom bungalow on two acres in Crossmolina, Co Mayo.

In the coastal village of Los Urrutias, right on the sea front, this three-bedroom apartment has views across the Mar Menor lagoon to La Manga. There is a balcony off the living room, a kitchen, bathroom and three bedrooms. The village has a church and central square where there is a market every Thursday. Its sandy beach joins the one at Punta Brava to the north. The nearest airport is Murcia. Price €129,950
Agent Comaskey.com

This period house is in the village of Cutrofiana, known for ceramics and shoes: and it happens to be right on Italy’s heel-point. The two-storey, 180sq m (1,940sq ft) home, behind the Church of Santa Maria della Neve, has traditional features such as vaulted ceilings, mosaic floors and a stone fireplace. There are six rooms on the ground floor and 10 on the first floor, one of which opens to a terrace overlooking the historic piazza and church. The town is 35km from Lecce and 75km from Brindisi and its airport.
Price €128,000
Agent casa.it

In the resort of Gumbet, on a cove to the west of Bodrum, by the Aegean Sea, this home measures 90sq m (968sq ft). Accommodation includes three bedrooms, three bathrooms and an open-plan kitchen with floor-to-ceiling glazed, sliding doors that open onto a balcony. There is also a roof terrace that looks out to Gümbet bay whose shoreline is 200m away. The duplex is in an art deco-style building with white inner and outer walls, wooden floors and black metal rails, recalling ships.
Price £113,000 (about €127,000)
Agent Vartur.com

In Morteau Couliboeuf, Calvados, this 299sq m (3,218sq m) maison de maitre was built in 1920. Period features include marble fireplaces, tiled floors, wide oak stairs and wrought iron gates. Inside is a petit salon with French windows, a grand salon (of 31sq m) with French windows, a library, dining room, and another room. On the first floor are four bedrooms (two of 25sq m) and a bathroom. There are four more bedrooms and a bathroom on the second floor. It needs some work. Price €129,983
Agent frenchestateagents.com

Why your muscles feel sore a day or two after exercise, and what to do about it