People know within eight seconds whether a house is ‘the one’, but we had no emotional reaction to ours other than, “What is that smell?” 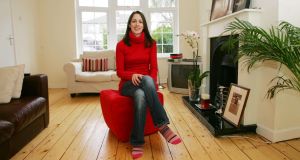 Caroline Madden: 'Between house price increases, and 13 years of paying down the mortgage, we were no longer in negative equity'

They say the best time to buy a house is always five years ago. In our case this turned out to be true. I was 26, my boyfriend 27, and we paid €480,000 for a house in west Dublin. And we did this with (yes, I’m hanging my head in shame) a 100 per cent mortgage. What could possibly go wrong? The year was 2006. Not long after, the property market stalled and then collapsed and we watched our home lose 40 per cent of its value. Welcome to Generation Negative Equity.

The irony is that we thought we were being sensible. What I really wanted was to live in an old house in the country with cats and, let’s be honest, a horse; my boyfriend wanted to move back to the seaside village he grew up in. My plan was clearly ridiculous, his unaffordable, so we met in the middle by buying a suburban semi-d.

Apparently people know within eight seconds of entering a house whether it’s “the one”, but we had no emotional reaction to ours other than, “Wow, who knew floral carpets came is so many patterns” and “What is that smell?” But it made sense on paper and ticked all the boxes on our checklist. We prided ourselves on seeing the house’s potential beneath its strikingly ugly decor; on beating off the hordes of other viewers and winning a bidding war for this diamond in the rough.

Fast forward a decade, my boyfriend was now my husband, and we were engrossed in the trench warfare of baby raising. Though we had given the house a facelift, it seemed to have shrunk several sizes. We were still stuck in negative equity. We knew we were very lucky to have a solid family home, but cabin fever had gripped us nonetheless.

My home office was now a nursery. I had moved my beloved Laura Ashley desk into our bedroom, then down into the freezing Pinterest-inspired “hall office”, and finally I let it go for a pittance on donedeal.ie. I began selling off more and more furniture but the more clutter I got rid of, the more sprang up in its place. At one stage we had three chests of drawers in our bedroom and we had to climb over them to pull the curtains. Something had to give.

Thirteen years of negative equity has also taught me the most fundamental rule of property purchasing: never, ever buy a house without a downstairs toilet. In our semi-d, squeezing a toilet under the stairs would have meant losing the fridge. And the washing machine. I still considered it. Potty training and contagious gastric flu will do that to a person.

The only thing I fantasised about almost as much as a second toilet was demolishing the wall between our dining room and kitchen. Rory, a builder who had helped out a friend with a rat problem (rule number two of house buying: always check that extensions have been rodent-proofed), gave us a quote of less than €5,000. But a US Congress-style impasse developed in our house over The Wall. I declared I’d take a sledge hammer to it myself if we didn’t get Rory in. My husband, ever the voice of reason, countered that we’d have to move out while the work was going on. With a baby. In winter. Plus that’s a load-bearing wall so step away from the hammer.

The impasse was broken one night not long after. I was up late writing when I saw flames flickering outside the back window. The boiler was on fire. (Rule number three: always listen to surveyors when they suggest replacing a boiler.) I called my husband down from the shower and we lugged casserole pots of water into the garden and doused the flames. There wasn’t much damage – just a little singeing when the voice of reason’s towel fell off in the excitement – but we had to move out for seven weeks for a new gas heating system to be installed.

We finally got our open kitchen/eating space, and I was as happy as Daniel O’Donnell in that episode of Room to Improve where Dermot Bannon let him have all those en suites, and it bought us a few more years. But our children kept growing and, according to those in the know, would continue to do so. We priced prefabricated garden studios (starting at €18,700), brick-built alternatives (€18,000), attic conversions (€15,000) and kitchen extensions (€30,000 upwards). Obviously in the end we just went to Ikea and bought more chests of drawers.

Then one day we woke up and realised it was over. Between house price increases, and 13 years of paying down the mortgage, we were no longer in negative equity. We could finally listen to property-related news bulletins without covering our ears and singing loudly. And rents had reached a level to cover our mortgage repayments. We had options.

The location still made absolute sense on paper, and we had the loveliest neighbours imaginable. But our friends from the old days had scattered – upsizing, moving home, emigrating – and we had no family in the area. Staring down the barrel of 40, it was time to make a decision. I said to my husband, “Will we try living by the sea this time?”