Divine conversion: the shop that became a stylish home for €795k 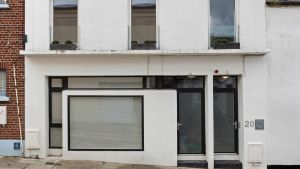 There have to be thousands of similar properties to 20 Wellington Street in small towns up and down the country. Not the smart, obviously transformed way it is now but how it was in 2013 when the owner purchased it.

Then it was an almost derelict old retail unit – an abandoned shop at ground floor with an apartment overhead. It had at some stage been incorporated into the adjacent building fronting on to George’s Street Lower where Knowles Electrical traded for 47 years until 2011.

As it was partially bricked up, in dreadful condition and without the obvious potential or maybe even permissions to turn it into a single residence it was quite the leap of faith by Jude Farrell, a young tech worker returning home after a spell working in London to undertake such an ambitious project.

She initially thought her budget would allow her to buy an apartment in Dublin  – she was looking at a one-bed in Ranelagh with money she made selling her apartment in London – but casting her search wider she hit upon the shop on the side street off Dún Laoghaire’s main drag which because the short street is mixed use, with businesses and houses, she believed had potential for conversion.

But before work could commence Farrell had to jump through several administrative hoops. During the conveyancing process her solicitor informed her that the property, which was leasehold, contained a stipulation in the lease that it should always be used as a retail unit on ground floor with living accommodation above. She was advised that this could cause problems down the line.

“That was a definite risk,” she says, adding that she opted not to tell her family of the lease issue as they already thought she was mad to take on the project.Farrell went through with the sale, then hunted out the leaseholder to buy the freehold, which she discovered after some sleuthing belonged jointly to two families, the Longfords and de Vescis although no ground rent had been collected for decades. She bought it out, she says, for “a few thousand”.

Two planning permissions were involved, one to change the retail unit to residential use – Dun Laoghaire Rathdown Co Council charged €15,000 for that change - and there was further planning required for the roof terrace.

“People think this is super easy and cheap, it’s not,” says Farrell who, as her budget was being eaten up, had to move in to the property two months before its completion when it had no electricity or heating.

Laughing now at the unglamourous part of the process she says she bought a decommissioned An Post van for regular trips to the dump and to pick up building supplies.

With the help of architect Mark Monaghan the result is an exceptional job. It is now a spacious, contemporary light-filled three-bedroom home with 146sq m (1,571sq ft) of interior space and two outdoor spaces: an inner courtyard at ground level off two of the bedrooms, the other on the flat roof with panoramic views out to the sea.

Two planning permissions were involved, one to change the retail unit to residential use – Dun Laoghaire Rathdown Co Council charged €15,000 for that change - and there was further planning required for the roof terrace.

It’s an upside down house. There are two doors and a large window to the front with opaque glass at ground level, one door is the entrance, the other opens into an internal store room for bicycles and bins while the large window belongs to a double bedroom. Two further double bedrooms are to the rear, opening out to the good-sized private courtyard and one with a shower room en suite. A bathroom, cleverly designed with well chosen sanitary ware and smart tiling in keeping with the en suite and upstairs shower room, is located under the stairs.

Upstairs – the staircase painted a glossy white – there are two rooms to the rear in the return, one is currently used as a home office but would certainly be large enough to work as a second living room or additional bedroom, the other a fully fitted out laundry room, the appliances concealed behind tall cupboards with heated drying rails and a window looking out to the side.

The spacious L-shaped open plan living area has three windows looking out over the street, with a kitchen to the rear. A wood-burning stove gives the seating area a focal point while a peninsula kitchen worktop acts like a room divider. Off this room is a further staircase up to the roof garden – the owner’s brief here to the structural engineer was to create a terrace capable of holding 60 people. It’s a sociable space, floored with reclaimed timber, and populated with raised planters, a barbecue and two seating areas.

Striking interior details were sourced over time as the owner’s budget allowed, highlights include retro style cast-iron radiators and mosaic bathroom tiling. Parking is on-street. In the intervening period, the former Knowles retail unit on the corner, next door to this rejuvenated property, has been reinvented as an Asian supermarket.