Made with 18 cushions covered in brightly coloured vinyl, it proved too costly to make 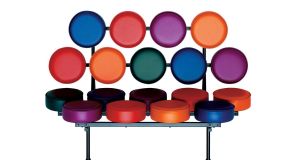 Originally, all the cushions were a single bright colour, typically yellow or red. Photograph: Vitra

Yale-educated architect George Nelson was one of the most powerful driving forces in design in the US in the 20th century. As design director for manufacturer Herman Miller, he commissioned key designers including Charles and Ray Eames and Isamu Noguchi to create for the company.

The now little-known Irving Harper designed the Marshmallow sofa (1956) – not Nelson as had long been assumed – which reimagines the traditional idea of the sofa, breaking it down, visibly, to its parts. Eighteen round cushions covered in brightly coloured vinyl are attached at regular intervals to a lacquered black steel frame.

Originally, all the cushions were a single bright colour, typically yellow or red. It could easily be extended by the addition of more cushions and a longer frame to create commercial seating.

It was intended as a low-cost item but the production of each cushion or “marshmallow” proved costly, and the innovative, modernist sofa was produced for just five years, with only 186 made. It is now made under licence by Vitra.