‘Ask your husband to buy you one’: the mad world of 1960s kitchen ads 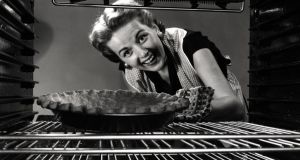 Mrs Krantz of Minneapolis beams at her apple pie baking in the oven in 1951.

Vintage lifestyle magazines are marvellous pieces of social history. They reflect the aspirational fashions and trends of the time. The ads in particular tell us strikingly revealing things about society, both in their wording and by highlighting the kind of material objects people were encouraged to buy. From time to time, I go through my vintage magazines, and never fail to be simultaneously entertained and horrified.

The magazines Homes and Gardens, and House & Garden (similar names which must have confused many readers at the newsstands) carried ads which made up at least half their content. Ads for kitchen appliances, gadgets and tableware remain a constant feature of today’s such lifestyle magazines. But the cultural difference between the wording of these ads in the 1960s and now is almost unrecognisable.

For example, if you wanted to improve your kitchen in the 1960s it was assumed that the kitchen was the sole domain of the woman, while the man paid for whatever was being advertised. Every time.

Dishwashers, an expensive addition to any kitchen, commanded full-page ads. One for the Prescot dishwasher showed a picture of a smiling woman holding a tray of clean plates and cups. The ad was comparing the particular brand with a generic dishwasher, and was headlined “Shoppers’ Comparison for Men”. Because, you know, it was the man who was paying, while it was the woman who would be loading and unloading.

If you needed help that year choosing a “Christmas gift for a woman”, look no further than an electric can-opener. “A really practical gift – a touch of luxury in the kitchen.” It even came disguised as a proper romantic Christmas gift, to increase the disappointment on being opened. “Beautifully packed in a brilliant gold and gloss white gift box, complete with a ‘buttonhole’ rose and greetings card. A special gift for the woman who deserves that extra consideration.”

There was a whole trope of gift-wrapping the most mundane kitchen items in an effort to sugarcoat the fact it was women who were expected to cook and clean.

Getting married in 1962? “Give the bride a bright future with the Addis Gift Set.” What was that? Why, a range of red and yellow scrubbing brushes: pan scourers (one called “The Bridget”) and pot scrubbers (“keep saucepans shining”). “Six brushes and a bowl, wrapped in cellophane and satin ribbon.” Presumably you tied up your hair with the satin ribbon while scrubbing and shining those dirty pots.

Also in 1962, along with the scrubbing brushes and electric can-openers there was an almost science-fiction look to the future. An ad for a Moffat built-in cooker, at eye-level, was written as if the cooker had computerised abilities, in an era long before computers were common in domestic homes. “Most cookers just stand there. But not a Moffat. A Moffat thinks for itself. Remembers exactly what you tell it. Takes responsibility. Looks after all the details.”

It’s unclear from the ad how this – unpriced – cooker thought for itself, but the curious public were invited to learn more by snipping a coupon and sending off for more details.

“Miele 420 De Luxe. The home laundry husbands respect.” It’s 1965 and this washing machine cost £199 (the equivalent of about €2,940 today). That was a lot of money in 1965, ladies, so of course, you were going to have to be smart in persuading your spouse to fork out both cash and respect for a machine that would lessen your workload, not his.

How did you do that? Appeal to the nerd in him; a tactic advertising brands still use. The washing machine had “superlative engineering” so “let your husband” (the word “husband” appears no fewer than four times in the ad) “be its judge”. In fact, the ad says, “Your best chance of owning a Miele 420 De Luxe must be to let him sell it to you. Be wily this way.” Your prize for being wily was a machine that had a special washing programme “for nappies”.

Did you know that “Woman’s work is never done . . .”? “A woman’s day starts in the kitchen and the kitchen light is often the last she puts out when bed at last beckons. No room in the house knows more of her time.” That’s how Formica saw the role of a woman in 1965: living in the kitchen, a life only made bearable because “the beauty of Formica surfaces gladden a housewife’s heart”.

Back to asking your husband to buy you things again. This time, a Salton Hotray, an electric “food server” that kept your dinner-party food “piping hot in the dining-room!”. The advantage of this gadget was that it enabled you to “give a dinner party and go to it yourself”. So instead of staying in the kitchen all the time, you loaded up your “meat, casseroles, vegetables, sauces, puddings” on the Hotray for an unspecified time, and hoped that the advertised “just-cooked temperature” wouldn’t end up giving everyone food poisoning. “Ask your husband to buy you one.”

Stainless steel was big in the 1960s, both in kitchen sinks and cutlery. Forget a cellophane-wrapped and beribboned bundle of scrubbing brushes as a wedding gift. Elkington cutlery’s aspirational gift for “newly-weds” was a canteen of stainless-steel cutlery. “The gift today they’ll be proud to use when he’s Chairman” was the headline over the ad, with a picture of a bride and groom. And what’s in it for the bride, as clearly she’s never going to be Chairwoman of anything? Why, an “air of satisfied superiority” when acting as “the hostess”.

Dishwashers again. “A woman doesn’t get married to become a dishwasher. It just goes with the job”, chirps an ad for Colston dishwashers. But if you purchase one of these appliances, you will be “set free from drudgery”. Buy one and you’ll have time for “your husband, your children” – and astonishingly, even though of course it’s listed last – “for yourself!”

That was on condition your husband agreed to buy one for you.