Heavenly island hideaway in the wild windy west for €390k 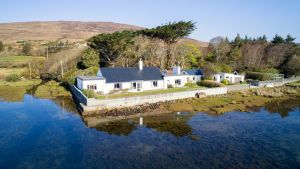 The roll call of artists who put Achill Island on the international map includes Belfast-born Paul Henry who first came in 1913 with American realist Robert Henri following in his footsteps a few years. It was the late 1950s when Camille Souter made the journey west. All captured its big, ever-changing skies, and the shadow play of the clouds on its bogs, hills and sea.

But when the wind picks up you have to hang onto more that your hat. Even its cash machine has a wind break to stop unfortunates losing their money to the surprisingly forceful winds. You see its effect on the shrubbery; most is bent over by the gale forces. Trees are scarce, save for a few sheltered spots such as the Bleanáskill Lodge and its secret garden, built by artist and taxidermist Alexander Williams whose landscapes capture the sumptuous scenery of Connemara, Achill and Kerry.

In 1899 he leased a ruined cottage on three acres about two miles outside Achill Sound and with labourers’ help built a house on what is the sheltered side of the island. Situated at the edge of the water he also planted about 90 Monterey pines, native to California and Mexico.

Nine of those trees were still standing when in 1995 Dutch artist Willem van Goor and his wife Doutsje Nauta saw a for sale sign while travelling along the Atlantic Drive, a coastal route that circumnavigates the island. The couple and their daughter were about two weeks into a three-week west coast camping trip and had been looking for a property near the sea within their budget.

Willem wanted to move from the Netherlands, where they lived in the city of Groningen in the northwest of the country. Doutsje did not. They made a pact that if they couldn’t find such a place on their vacation the idea would be shelved, never to be spoken about again.

They were completely smitten and have spent the last 25 years cultivating the gardens, which they open to the public during the summer season. There are several specimen trees, a weimannia from Mexico and others from Chile and Tasmania.

The design is by van Goor and the three acres of land has been enriched by seaweed harvested from the shore at the end of the garden with areas fenced to create outdoor rooms that lead one to the other. There’s also a vegetable patch and a polytunnel where grapes and figs flourish in the mild climate.

As for the house, it overlooks Achill Sound, the tidal waterway that ebbs and flows every 12 hours and comes right up to the boundary walls of the property, on which they spent about €70,000, Doutsje estimates, protecting it from both sea and rain water flooding.

The property has up to six bedrooms, depending on how you want to configure it. The main house, which has three bedrooms, two of which are ensuite, extends to 215sq m/2, 314sq ft and like many country homes you enter the house from the back where the rooms are accessed via long hall of yellow and terracotta quarry tiles.

The big reveal is when you enter the drawing room, also the artist’s studio, where a glass porch frames the vista, Achill Sound and the Curraun peninsula, and an ever-changing mash-up of light and shade. The bedrooms too have views that might make you take to the bed forever.

The owners use the detached, three-bedroom chalet, about 48sq m/516 sq feet, as a holiday rental.

The property, which comprises the three-bedroom main house; chalet, boathouse and slipway on three acres of gardens, is asking €390,000 through agent Achill Island Property.