Seven houses that turned a tidy profit in 2017

Some investors made quick turnaround gains of more than 100%, especially on houses in need of serious repair in good areas 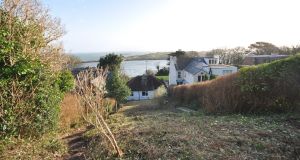 View from Bella Vista, Coliemore Road, Dalkey, on sale in need of complete overhaul in March for €1.2m, sold by June for €1.4m

And this year many such “flippers” managed to do just that, making considerable gains on properties they had picked up in recent times – some only a few months prior to the sale.

For putative developers chasing the biggest price gains, many of the examples here show that the old adage holds: buy the worst property in the best area. And if it’s period, better again.

Get in, renovate, get out

Was this the quickest six-figure gain in the Dublin market this year? It came on the market in February, offering views of Dalkey Island near the foot of Coliemore Road in the upmarket Dublin suburb – as well as a detached bungalow of just 700sq ft. While it didn’t quite make its asking price of €1.25 million when it sold a month later, the property was sold on again quietly just a few months later, at a cool gain of some €200,000.

This detached home first went to the market for €1.395 million back in January 2015, with planning permission to demolish the entire property, before selling for €1.1 million that summer.

A complete overhaul then followed, to turn it into an unrecognisable A-rated turnkey four-bed family home, fitted out by House & Garden Furnishings.

Sold for substantially less than the asking in 2016 (€950,000), this mid-terrace Victorian property in ever-popular Ranelagh came back to the market less than a year later with some careful staging and made substantially more. Rising tides and all that.

Buy at the right time

Where: The Steelworks, Foley Street, Dublin

Buying at the right time can negate the need for any costly renovation works. This two-bed apartment in Dublin’s city centre was sold for a keen €115,000 back in 2013, and has since proven attractive to investors, pushing up its 2017 sale price; a similar property is available on Booking. com for €185 a night.

It came to the market in the dog days of summer 2013 for €795,000, but it took until the end of the year to achieve a sale, at considerably below the asking price at €680,000. Fast forward three years however, and this period house in the Dublin suburb achieved more than double its 2014 sale price.

Asking €285,000, this two-bed Dún Laoghaire terrace just a few minutes’ walk from the centre of the town was in need of “complete modernisation” when it hit the market back in 2015. It eventually sold for €210,000, but came back to the market all spruced up earlier this year, almost recognisable except for the exterior, for a heftier €445,000. But it outdid even this price, selling for €560,000.

A stylish renovation saw this period canal-side property – boarded up when originally bought in 2016 – more than double its price in little more than a year. It didn’t quite make the asking price second time round however, of €695,000.

And a flip that flopped?

A detached Arts and Crafts-style house on swish Mart Lane went against market trends when it sold at a drop of 10 per cent between October 2016 and August 2017. Originally on the market in June 2016 for €1.95 million, the William Orpen-designed home sold later that year for below the asking price. Subsequently, planning permission to extend and renovate the property was submitted in March 2017, but was deemed invalid by the planning authorities, and the house went back on the market, selling at a loss of €175,000 that summer.

Ask the expert: Dealing with a slap-happy one year old
8