Ticket Awards 2017: The best films of the year

Here are our favourite film moments of the last year. Don't forget to vote for yours 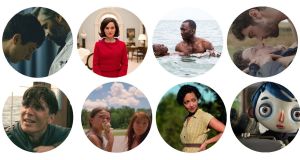 Our critics have picked their standout performances from 2017 and now it’s over to you. Click on irishtimes.com/ticketawards to vote for your favourite scene stealers from 2017. If you think we went off-script, nominate your pick in the space provided at the end of each category online. We’ll publish the results in two weeks and you’ll be in with a chance of winning one of our prizes.

It’s not just about film, though. Check out our cultural picks across books, music, art and television.

A few films knocked the ball out of the metaphorical park – The Florida Project, Moonlight, Get Out – but, for the most part, this was a year of steady, consistent achievement, rather than spectacular success. The streaming services rustled a few of the tastier features. The box-office wobbled. Cinema remained, however, awash with variety and creative strangeness. If there were an award for the film people seem most proud of not liking it would go to poor old La La Land. No, you weren’t the only one.

My Life as a Courgette
Wonderful French animation that, despite being set in a home for troubled children, managed a stirring optimism throughout.

The Florida Project
After the iPhone experiments of Tangerine, Sean Baker brings us among families living awkwardly in the maroon penumbra around Walt Disney World. A great film about childhood.

It Comes at Night
Trey Edward Shults explores new paranoias in a post-apocalyptic thriller set within a remote cabin during a deadly outbreak. Trust nobody.

Aquarius
Sônia Braga stands out in a superb drama detailing an older music critic’s efforts to remain living in her beachside apartment.

Dunkirk
Vroom! Crash! Christopher Nolan goes for cinema of effect in his study of the most triumphant defeat in military history. A technical marvel that made the most of theatrical exhibition.

Lady Macbeth
Florence Pugh eats up the screen in William Oldroyd’s ruthless translation of Lady Macbeth of the Mtsensk District to windy Northumberland. We cheer on the murderer.

Jackie
Natalie Portman has received deserved praise for her turn as a bereaved Jackie Kennedy in Pablo Larraín’s bewitching film, but the standout element is Mica Levi’s spooky score.

Get Out
Few genre mash-ups have, in recent years, had quite such emotional and political punch. A blackly funny satire on middle-class racial tensions that throbs with sobering lessons.

The year began with the depressing news that, despite a rumbling diversity debate, the number of female directors fell in 2016. Women comprised just seven per cent of all directors working on the 250 highest-grossing domestic releases in 2016. Yet they occupy four spots on our shortlist of 10. So when are the big franchises going to start hiring them?

We sometimes fall into the trap of taking “best cinematography” to mean “most cinematography” and you will certainly find few more intoxicating images than those in Park Chan-wook’s The Handmaiden. But we also saw restrained work from our own Kate McCullough in The Quiet Architect and, in the funky Beach Rats, from up-and-comer Hélène Louvart. Still, a “best means most” award (and probably an Oscar) goes the way of Roger Deakins for Blade Runner 2049.

The new vogue for art horror provided plenty of great, genre-bending repartee (especially Get Out and Raw) but snappy dialogue is no longer a requirement for great screenwriting, as the frequently silent Dunkirk and the largely quiet Ghost Story demonstrate.

How nice it is to welcome Kristen Stewart and Robert Pattinson, the class of Twilight, into the winners’ enclosure. Those fine actors have, with, respectively, Personal Shopper and Good Time, shown an admirable determination to use their fame for good rather than evil. Isabelle Huppert deserved that Oscar nomination for the tricky Elle. And James Franco came good in his own mad film. What variety.

Hot dog, if 2017 wasn’t the Year of the Ensemble. Many films, notably Mudbound and The Death of Stalin, featured no one performance that could be easily singled out for awards purposes. There were great team efforts from The Disaster Artist, Lady Macbeth, Norman: The Moderate Rise and Tragic Fall of a New York Fixer and, well, we could go on and on. Now if only a certain academy would take note.

Not everybody here is fresh out of the box. It has taken Anna Biller 10 years to follow up her first feature, but The Love Witch a delicious feminist horror, finally pushed her to the top table. Emily Beecham owned the role of a troubled singleton in Daphne. Two youngsters stood out at this year’s Cannes Film Festival: Ahn Seo-hyun – friend to a giant pig – brought humanity to Bong Joon-ho’s characteristically strange Okja and Brooklynn Prince charmed the world in the sad, touching The Florida Project.

The Great Documentary Rush of the Noughties seems like an awfully long time ago. And the best docs of recent times – Ava DuVernay’s The 13th, Kitty Green’s Casting JonBenet – have gone straight to Netflix. As with animation, it was a tough year for docs. Plenty of titles received small theatrical runs, but few hung around or caught the public imagination. Some gems, nonetheless.

Adam Sandler reminded us that, when steered away from effluent, he really can act. Julia Roberts found a warmth we had little seen recently in the eight-hankie tear-jerker Wonder. Vaughn kicked bottom. Kidman reversed her slide. But, among 1980s phenomena, Michelle Pfeiffer delivered the most lethal blows. She radiated real sass in both Mother! and Murder on the Orient Express. Great to have her back.

There was nothing as splashy or as Oscar-baity as Room or Brooklyn in 2017. But there were lots of small, sweet, smart movies. Too many, in fact. In another year, The Drummer and the Keeper, Between the Land and the Sea, Maze, or Rocky Ros Muc – to name just four – might have waltzed onto the shortlist. We used to pick just five films here, you know. Strength in depth.

If only Cartoon Saloon’s The Breadwinner had been finished that little bit earlier, it would have wiped the floor with all comers. There was no Laika film this year. And Pixar was on poor form (Cars 3 anyone?). There were, however, plenty of cheaply produced, celebrity-voiced nasties, including Spark and The Nut Job 2. Thank goodness for Your Name, Lego Batman, and The Red Turtle, a European co-production that proves there may be life for Studio Ghibli after Miyazaki.

A weird year for the big mainstream series. Wonder Woman stood out like a spring flower in the grim wasteland that was the DC Universe, but even she couldn’t save Justice League. Meanwhile, Marvel grasped full-on fun with the delightful Spider-Man: Homecoming and the hilarious Thor: Ragnarok. Paddington 2 continued that series in triumph. The grim War for the Planet of the Apes closed a singular trilogy. There is hope in the multiplex.

It was a fine year for movie music and narrowing down the field was no fun at all. Michael Giacchino’s orchestrations for War on the Planet of the Apes provided a suitably grand exit for Hollywood’s finest franchise, Sufjan Stevens went full-swoon for Call Me by Your Name, Mike Patton brought the dissonance to Netflix’s 1922, and Baby Driver zoomed along to everyone from The Modern Lovers to Martha and the Vandellas. All missed the cut.

Love/Hate is beginning to look like the most significant acting academy of recent years. Half of this year’s 10 – Barry Keoghan, Tom Vaughan-Lawlor, Caoilfhionn Dunne, Ruth Negga and John Connors – graduated from those mean streets. Who else is yet to emerge? We also had great turns from Charlene Kelly and Kieran Coppinger, two actors with Down syndrome, in the singular Sanctuary. Catherine Walker did angst in A Dark Song. Fionn O’Shea was charming in Handsome Devil. You know about this Colin Farrel chap.

Ah, the trough of shame? Yes, Daddy’s Home 2 was utterly horrible. Deciding between Baywatch and CHiPs was a real “angels on the head of a pin” conversation. Fifty Shades Darker and Transformers: The Last Knight somehow managed to be worse than necessary. But the largely unseen standout (if that’s the word) was jaw-dropping Ukrainian epic Bitter Harvest.