The best Irish-language books of 2017 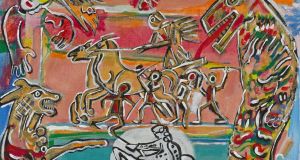 Is it a sign of age? When this writer first started hacking away in this paper, 21-odd years ago, it would have been possible to read almost every book that was published in Irish. There were so few of them. That is no longer the case. The poor fear an phoist is wrecked delivering books hot off the presses. Reading the odd book here and there is no longer an option. Reading in Irish demands (and deserves) time and energy.

It is not just this poor hack who is feeling his age. TG4 is 21 years a-broadcasting and Seán Tadhg Ó Gairbhí’s Súil Eile (Cois Life, €20) is a detailed and insightful examination of the station from its foundation until the present day. Editor of the online news service, tuairisc.ie, Ó Gairbhí is the first generation to grow up with TG4. He writes of how, in his youth, speaking Irish would have been seen as a sign of backwardness. TG4, however, has given the language a certain cachet.

That said, the early days of the station were marked with much hostility. He recalls the arguments, often vicious, which were directed towards the fledging service by many English-speaking commentators. He also details that not every Irish speaker was enamoured with the service and that it was often criticised by the same people it was supposed to be serving. (This journalist is mentioned in that critique of the station.)

The highs and the lows of the past 21 years are all here and this will be the standard book for anyone wanting to take a súil eile at the history of the station for years to come.

The late Nollaig Ó Gadhra’s journalism began long before the internet age. His daughter, Máirín, an accomplished journalist with RTÉ Raidió na Gaeltachta, has invited some of his acquaintances to offer their memories of the man and his work. Nollaig Ó Gadhra: cuimhní cinn (Cló Iar-Chonnacht, €12) is the fruit of her labour. It gives a personal look at the times in which he lived and his interests in politics, history, language and journalism. There are 21 essays from a wide range of people including politicians Éamon Ó Cuív and Máire Geoghegan-Quinn; broadcasters and journalists including Cathal Goan and Eoghan Harris; and from friends in the Irish-language movement.

Colm Ó Ceallacháin’s I dTír Mhilis na mBeo (Cois Life, €10) is a debut collection of short stories. This is a good book, well-written, full of interesting stories and characters, alive and immediate in its approach to contemporary Irish society. Ó Ceallacháin writes about people without power and his characters are believable. There is a sure touch here, a writer who deals in light and shade, one who is both measured and yet passionate.

Alex Hijmans – Dutch born, Irish speaking, Brazil living – is a journalist by trade and has been a regular contributor to Irish-language media over the years. He has also built up a well-earned reputation as a writer of good fiction. His latest collection of short stories, Idir Dhá Thír (Cois Life, €12), is an imaginative and engaging work that takes the reader on a global tour and examines the emotional effect of immigration on a range of people. There is a saying in Irish: Bíonn siúlach scéalach/Travellers have tales to tell. That is certainly true of Hijmans’ latest book.

There is a different kind of imagination in Anansi agus Scéalta an Domhain (An Gúm, €7.50) by Éamonn Ó Ruanaí and illustrated wonderfully by Kieron Black. The author has taken a character from African folklore, Anansi, and given the reader a fistful of wonderful stories that spark the imagination. The Irish is rich in its simplicity – Ó Ruanaí is a teacher after all – but never dull. The reader understands how Anansi, the spider, thinks, feels and the consequences of his mischievous actions. It is one of those lovely, fresh books to which the reader will return again and again. There is a glossary which provides information on phrases and words for those out of practice in reading Irish.

Labhairamach.com by Áine Uí Fhoghlú (Cló Iar-Chonnacht, €8) is a contemporary story about Ciara, a secondary-school pupil, who is being bullied at school and online. Uí Fhoghlú describes Ciara’s distress as the vicious campaign continues and the detrimental effect it has on her wellbeing. It is an issue that affects many and Uí Fhoghlú handles the material with skill and compassion. Aimed at the teenage reader, there is a short glossary too. Certainly a book worth giving to a teenager but also one that any adult reader will enjoy.

Cúchulainn: Ulster’s Greatest Hero (Gael Linn, €25) is an epic translation of the deeds of the fabled warrior by Réamonn Ó Ciaráin, accompanied by astounding paintings by Dara Vallely. All the old stories are here: Cú Chulainn’s young days, how he got his name, the wooing of Eimhear, the cattle raid of Cooley and Cú Chulainn’s death. There is also a guide to pronunciation, a description of the characters and, just as important, of the place names which link the story to the land. Both Ó Ciaráin and Vallely are Armagh men and there is something very uplifting that the old stories still have the power to move the contemporary imagination. This is a beautifully produced book and one that would grace any book shelf.