Dublin 6 development will feature 20 high-end homes to be built on 1.25-acre site 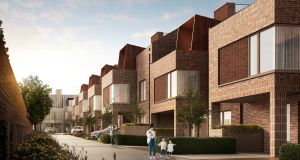 Ranelagh village is set to get a new address with the launch of Annesley Gardens, a new development to be built on a 1.25-acre site sandwiched between Annesley Park and Killeen Road, in Dublin 6. The site, which was once a single property featuring a long back garden, is bang in the middle of the chic suburb, with a parade of shops around the corner – everything from Morton’s supermarket, where you can run an account, to a pharmacy with doctor above, local newsagent Rosalins and even a furniture and accessories shop for finishing touches.

The Green line Luas stop is a minute away as are several national schools, and there are several secondary schools within a 15-minute walk.

There will be 20 houses in total – 12 four-bedroom properties and eight three-bedroom-plus-study homes. Seventeen of the houses will form a new terrace while the remaining three will be in a smaller row. The three-beds will measure from 149sq m (1,559sq ft) while the four-beds will range from 168sq m (1,795sq ft) to 186sq m (2,009sq ft).

Prices have still to be finalised but you can expect to pay in excess of €1.25 million for the three-beds and €1.6 million for the four-beds, says Colm Byrne, director of new homes at SherryFitzGerald.

These homes will have their own streetscaping, own front drives and back gardens and will be in walk-in condition

He’s keeping quiet on which design firms will be doing the interiors, at least for now, but the architecture and urban design agency Metropolitan Workshop is in charge of the red and buff brick look of the exteriors and for the overall layout. The company, which has both London and Dublin offices, won a prestigious RIBA National Award last year for its Mapleton Crescent scheme in Wandsworth and has worked on Mariavilla, the large riverside development outside Maynooth that includes residential homes and student accommodation.

This choice was a smart one by developer Seabren - led by Michael Moran of the Red Cow Inn, and Johnny O'Loughlin -  which bought the lands in May 2018. The sale made headlines for making a record price for lands without planning permission, selling agent Iain Finnegan of Finnegan Menton said at the time. The property had a guide price of €4.9 million and made more than €4 million over its asking price when the hammer came down at €8.7 million.

The decision to set the units out over 2½ levels – much like the period properties that surround them but minus draughts and heat-leaching rooms that the originals, when in need of refurbishment, suffer from – was a good one.

These homes will have their own streetscaping, own front drives and back gardens and will be in walk-in condition. The first of the houses won’t be ready until much later in the season, but already enquiries have been steady since the scheme was launched on January 1st.