Bold and colourful, but not as garish as many postmodern Italian pieces by Memphis 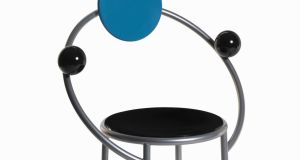 Memphis First Chair, 1983: The base and back are enamelled wood while the curved frame is metal.

Disregarding the rather superior-sounding name -– this is not after all the first chair ever – but it is a chair produced by postmodern Italian design group Memphis, and more specifically by one of its many founding members, Italian architect-designer Michele De Lucchi. Its first exhibition in 1981, with its startlingly colourful pieces of furniture, launched the group into international notoriety. De Lucchi designed several pieces for Memphis including this First Chair in 1983, before the group disbanded in the late 1980s . The base and back are enamelled wood while the curved frame is metal. It is bold, bright and colourful – not as garish perhaps as many Memphis pieces.

It doesn’t exactly invite you to sit in it although it is surprisingly comfortable – for short periods. Style bibles such as Elle Décor have been predicting a return of Memphis style, with its bright colours and fun, for some time now – though maybe that says more about the desire to see the back of all that mid-century modern, pared-back good taste than a true love for the giddy Italian work.