I own acres of bog but how can I prove it? 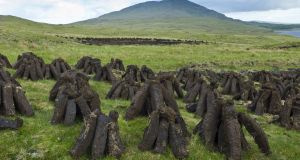 In many instances the Land Commission appointed trustees in the early 1900s to oversee the use of the bogs.

My house and farm, which I inherited, includes two plots of bog consisting of about seven acres. However, these plots, while in the same townland, are not included in my original Land Registry folio. I have no deeds or documentation to prove my ownership. I understand that the plots originated as turbary rights granted to my great-grandfather in the 1800s. He was a tenant farmer on the farm, which has been in my family since. My neighbours have similar plots of bog.

I understand that the Land Commission was involved in the transfer of the farms about 1920 from the landlord to the tenants, but I have no records relating to the bog plots. They have been substantially cut away and reclaimed over many years and we now use them for growing meadow each year. Parts of the boundaries are marked by drains and parts are unmarked but are known to us. There are no maps showing the individual plots and the Ordnance Survey maps are blank over the entire area of bog except for the access road.

How do I go about getting maps and proving my ownership so that I can register my two plots?

Bogland is one the most difficult categories of land to map and in which to prove ownership. The process usually requires a considerable amount of legal work, and surveying and mapping expertise. Practitioners are often reluctant to take it on because of the complexity of title history, the absence of records and the difficulty in establishing boundaries. The combined cost involved, including the cost of engaging a surveyor and/or an engineer, in addition to a solicitor, the cost of surveys and mapping, inspections of drains and access, if required, and the volume of work involved in proving ownership, may be in excess of the commercial value of the bog.

It appears, from the information provided, that your predecessors did not formally acquire any interest in the plots, and that the interest you are claiming evolved from your and your predecessors’ possession and use for approximately a century. This possession and use, in turn, evolved from the turbary rights granted to your great-grandfather. Turbary rights were merely the right, usually granted by a landlord to a tenant, to cut turf, spread, dry and remove that turf for the tenants use. The rights were for personal domestic use only and were attached to the tenant farmers house rather than the farm.

Such rights did not grant the tenant any exclusive rights to a particular area or plot of bog defined by boundaries. It is therefore likely that your title in the two bog plots will have to be established by way of adverse possession, and, registered accordingly in the Land Registry. Your solicitor will advise in relation to this.

It may be possible to reduce the cost involved, if you or a family member can undertake some of the background research and retrieve as much information as possible. As it is likely to be an adverse possession claim, the Land Registry will require substantial evidence of your and your predecessors’ possession and use of the plots, including how they originally came into your family’s possession. It will be necessary to document the evidence. The best approach is to trace the history of ownership of the farm on which the house, to which the original turbary rights were attached, was/is located.

The earliest extant document that associates tenant farmers in Ireland with their landholdings is likely to be the Order Fixing Fair Rent made by the Court of the Irish Land Commission in the late 1880s. These orders usually noted the existence of turbary rights. Under the land acts the landholdings were subsequently transferred from the landlords to the tenants by agreement between landlord and tenant, subject to annuities determined by the Land Commission.

In many instances the Land Commission appointed trustees in the early 1900s to oversee the use of the bogs. These trustees, and subsequently the respective landholders, were then listed by the valuation office as occupiers in common of the bogs rather than occupiers or lessees of individual plots within the respective bogs. Accordingly, the valuation office maps indicate common use of the bogs by designating a single map references number for each bog.

The aforementioned sources, and your Land Registry folio, are therefore the best starting point for your research. The Order for Fair Rent, the agreement between vendor and tenant documents and possibly a landlord’s estate map are stored in the records branch of the Department of Agriculture. You are fortunate if you have copies of these documents in your possession as access to them in the department’s records branch is restricted.

If your, and your neighbours’, subsequent occupation of the bog plots were included for valuation purposes a valuation certificate, listing your predecessors’ names, and a valuation map, indicating the relevant valuation map reference number, will be available from the valuation office. Copies of the 1901 and/or the 1911 Census returns and the associated list of townland household names, will demonstrate that your predecessors resided in the townland at that time.

In addition to information on how your predecessors came into possession of your two plots the Land Registry will need evidence of the continuous possession and use of the defined plots up to, and including, your possession and use. You should therefore document the names and relevant dates, in chronological order, of all successors in title to your house and farm, from your great-grandfather to yourself, inclusive. Information in the form of statements from older family members and local people with knowledge, will support your claim. You should also obtain copies of relevant wills, letters of administration, probate certificates and death certificates, as part of your evidence. All information relating to the use of the blog plots, including photographic evidence, which supports your claim, should be collected.

An affidavit, sworn by you, is usually required when making a claim for adverse possession. The affidavit is a statement of factual information, which you believe to be true, which should demonstrate your, and your predecessors’, possession and use of the two bog plots. It may include information you have obtained from your predecessors and from others, including family members and others with historic knowledge, which will support your claim.

You will require a Land Registry-compliant map for registration. To obtain this you will first need to confirm the boundaries of your plots with the adjoining neighbours, install boundary marker posts on unmarked sections, and engage a chartered geomatics surveyor to carry out a survey and prepare the map accordingly.

Your solicitor will draft your affidavit and advise if, some or all of the supporting information collected by you should be included in the affidavit or attached as exhibits. This affidavit and the map prepared by your surveyor will be the key documents in your application.

While not all of the supporting information referred to is essential, the more you can source, the stronger your claim will be to your plots of bog, which, as stated at the outset, is one of the most difficult categories of land in which to prove ownership.

Dyspraxia: When the brain takes the ‘scenic route’
4