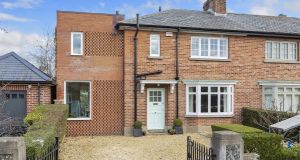 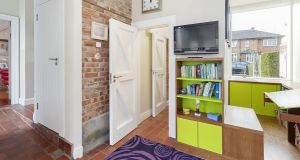 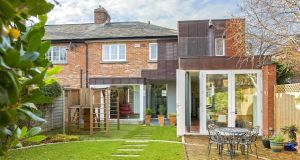 As only the second owners of 3 Whitebeam Avenue, the couple who bought the 1930s three-bed semi in 2004 knew they would have to do considerable updating. The wide leafy roads of the much sought after Crampton-built estate between Milltown and Clonskeagh are lined with houses of varying sizes, to suit a variety of family types – a forward-thinking approach by one of Dublin’s most popular builders. Nowadays, buyers tend to extend as well as modernise.

The owners of number 3 did all that – and in considerable style. They commissioned Limerick architect Morgan Flynn of AgleArchitecture to reimagine the space. They are now upsizing, and have again commissioned the same architect and builders so it was obviously a good experience all round. At number 3, he delivered a plan that’s full of interesting detail and clever use of space.

From the front it’s clear this house was been modernised – the striking chequerboard brickwork in the two-storey side extension is designed for privacy and also to let light in – while to the rear perforated copper screens at the upper level perform the same function.

Inside, the property now extends to 155sq m/1,668sq ft with four double bedrooms – two original (with their pretty fireplaces) and two in the new side extension. The original boxroom to the rear was converted into a roomy bathroom while to the front a new shower room is adjacent to the main bedroom.

At ground floor there’s the same mix of original 1930s and contemporary design. The view from the front door is through to the back garden via a floor-to-ceiling glazed screen at the end of the hall – another clear sign to visitors that the house has been thoroughly modernised.

To the right, the front reception room is largely untouched, down to its original 1930s tile fireplace – except for new windows in the bay – it opens into the rear room, subtly changed by the addition of a small extension and a large glazed screen in the side wall that looks into an inner courtyard that effectively links the old and the new, and beyond that into the kitchen in the side extension.

In the spacious eat-in kitchen one wall is mostly glass though the architect detailed wire supports for a vine which makes for a leafy green screen in the summer. Off the kitchen to the front is a shower room, a small utility and a children’s play area, its custom-built shelves and art nook painted a zingy green with a sink for messy play.

Interesting architectural details range from the half doors in the extension and kitchen to the copper gargoyle gutters to channel rain from the kitchen’s flat roof into a stone trough in the courtyard.

The landscaped back garden is a good size and the front garden has parking for a couple of cars as well as a bike store.

No parent wants to be a killjoy, but it’s time party bags were banned
9