To plan this year’s festival in a pandemic, the organisers had to think outside the usual spaces 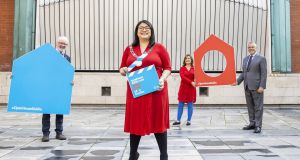 When the first lockdown descended last spring, Irish Architecture Foundation (IAF) director Nathalie Weadick and her team would normally have been gearing up for the foundation’s big annual event, Open House, but suddenly they were faced with a dilemma. How do you approach a weekend of gathering people together and bringing thousands of people through houses and other buildings, during a pandemic? “How do we do a project that is about space in the city, that is the antithesis of the restrictions?” asks Weadick.

OHD found itself in the same Covid-19 basket as its 48 sibling Open Houses all over the world. A giant Zoom meeting in May, sharing ideas and approaches, was, says Weadick, comforting and collegial but also extremely useful. Plus, their usual partners, DCC, DLR and OPW, tons of architects, and OHD’s corporate and public funders, all rallied around, offering help and resources.

And so it’s come to pass that in a pandemic year when we’ve all rediscovered our communities and neighbourhoods, and the positives and limitations of our own homes, Open House Dublin is managing to showcase the “Extraordinary Ordinary” in Irish design and architecture in a substantial free programme next weekend.

While OHD has had to cancel the limited physical indoor events they’d planned, Weadick says “we were always aware they might have to go”, and instead the main focus was outside that. OHD’s Big Project this year is a series of newly commissioned documentary shorts, plus there are outdoor walking tours, a selection of virtual architecture tours, and a family programme. It kicks off on October 8th with the popular annual Big Debate being live-streamed.

Weadick is very excited about Site Specific, the series of 10 films the IAF commissioned from Dyehouse Films. The documentary shorts of around five minutes each range from internationally renowned Irish architects Shelley McNamara, Yvonne Farrell and Grainne Shaffrey on their plan for Parnell Library, to Rosemount Court social housing in Dún Laoghaire to Niall McCullough’s Dublin flyover.

Weadick was adamant the video segments would not be a version of estate agents’ virtual house tours, and the hybrid storytelling project is “about engagement, the public meeting the building, and the creator of the building, through the medium of film”.

We need a big reset in how Dublin functions. The city is on its knees, and Covid has uncovered communities and systems already under pressure

The rushes are coming in as we speak and she’s delighted with the work done by David O’Sullivan and Bonnie Dempsey of Dyehouse. “It’s a snapshot of time, movement and place. You get to see the buildings up close and from drone, and hear from people who have designed them or who use them and who love them.”

The livestreamed Big Debate, titled Dublin’s Fair City? – the public can register to attend, and pose questions – will be about how fair the city really is, not just physically, but socially and environmentally, looking at the role of architecture in addressing societal inequalities, and will be influenced by what we can learn from the pandemic.

“We can see the city has changed, but we need a big reset in how Dublin functions. The city is on its knees, and Covid has uncovered communities and systems already under pressure,” says Weadick, who hopes the debate will be provocative, “an instrument to move the action”.

There will also be a large progamme of actual walking tours, and a video series On Site With . . . architects and others.

Weadick says the pandemic virtual meeting was also the inspiration for a worldwide virtual festival of architecture that will take place on November 15th, with all 48 Open House cities contributing; OHD will host a youth debate about climate change.

While Weadick muses now on how long it will be before people will be happy to have others tour their homes again, her enthusiasm is infectious about next weekend and OHD’s Extraordinary Ordinary year in 2020.

Digital tours peeking into homes “home-made” by architects including Clancy Moore, TAKA, Ryan Kennihan. Online from Friday October 9th. Including a small terrace of 1990s mews by Cian Deegan and Alice Casey from TAKA, converting unused garage space into a kitchen and refurbishing the ground floor; Ryan Kennihan extension and renovation for a family in Phibsborough, crafted using natural materials and clever use of light; and virtual tour by Culligan Architects of a house, coachhouse and garden to the rear of Prince Edward Terrace Lower in Blackrock.

short film showcasing an attempt to recreate Dublin’s lost 18th-century House of Commons (currently the Bank of Ireland HQ), part of TCD History of Art and Architecture research on craftsmanship.