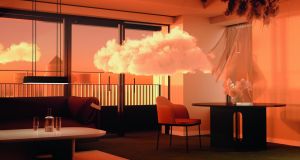 The team took sunset inspiration to create a warm colour scheme with a humorous touch in a fluffy cloud hanging mid-air in the room.

Take for example the swimming pool in the sky at Embassy Gardens in London, which was finally winched into position last Monday, and the biophilia bravado at west London’s Brentford Project, currently under construction.

It makes sense then that it has now partnered with style bible Wallpaper magazine’s interior design wing, Wallpaper Composed, on its latest projects. This wing was set up to work specifically with developers on projects from show units to pop-ups. Amy Heffernan, editor of the division and an interiors stylist, (and a second generation Irishwoman) has created themes and mood boards for each of Ballymore’s three developments.

“Normally we fit out physically but because of Covid-19 we have digitally created the show homes of the future,” she says. The publication’s reputation as a trend setter with a design-orientated reach is the attraction for savvy developers.

At Goodluck Hope, in what was once East India Docks, Heffernan’s team pictured “a start-up entrepreneur, someone into music to reflect the industrial feel of the development”. Its pitched roof lofts, unusual in today’s new builds, offer a vision of calm and the renders by Studio Brasch have gained the most traction with Wallpaper’s audience, she says. While prices for the one-bed apartments start at £515,000 (€562,600) the lofts command prices starting at £1.1million.

At Mill Harbour, beside Canary Wharf, where 1500 new homes and customisable apartments, a theatre and education facilities are planned, the team took sunset inspiration to create a warm colour scheme with a humorous touch in a fluffy cloud hanging mid-air in the room.

Wallpaper Composed collaborated on Ballymore’s Wardian development in Canary Wharf too, where 766 homes from one-bedroom apartments to penthouse suites are located across two 50-storeys high towers with sky gardens. “It is all designed to generate interest and challenge the norms,” says Jennifer Ball, Ballymore’s corporate communications manager.

“The designs defy reality but help to capture people’s attention.”

‘When you do put your clothes back on, you’re changed’: The nudists of Killiney
5