Victorian classic sums it up on elegant Rathgar square for €1.35m 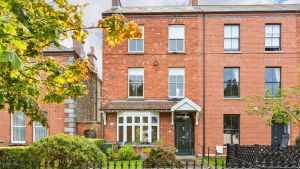 A three-storey house on Kenilworth Square South in Rathgar has served as a happy family home for a couple who have lived and worked there for the past 40 years.

Like many of the Victorian houses in the area, it was set out in bedsits when the owners bought and they had a lot of work to do to turn it back into a single family home. They replumbed, rewired, put in central heating, painted and papered the walls – and 13 years ago, extended the entire property by adding a very bright kitchen/living extension. The four/five-bed end-of-terrace Victorian now extends to 253sq m (2,723sq ft) and is for sale through Sherry FitzGerald seeking €1.35 million.

The property has an interesting passing link to second World War history: a German professor of mathematics, Ludwig Hopf, once an assistant to Albert Einstein, lived at number 65 in 1939, after escaping the Nazi regime to become a professor in Trinity College; he wrote to friends in Germany that he was living in a “very beautiful, very famous and very expensive corner of Europe”.

He stayed in the house from July until December 1939, when he died suddenly: he was eulogised at his funeral by colleague Erwin Schrödinger as “a friend of the great geniuses of his time – indeed, he was one of them”.

The house retains to this day many of its original period details – high ceilings, marble fireplaces, a centre rose and elaborate cornicing in the hall – undamaged by the many years it was set out in bedsits.

New owners are likely to want to redecorate the house and revamp it to meet their needs, but there’s lots of room to manoeuvre, with so many rooms arranged over the three floors. The reception rooms, for example, include interconnecting rooms on the ground floor as well as a drawing room on the first floor spanning the width of the house.

The ground-floor reception rooms are currently set out as livingrooms-cum-offices, connected by original stripped pine double doors. The front room has a deep bay window with stained-glass panels, and a white marble fireplace with cast-iron and pretty tiles inset; the other room also has an open fireplace with timber surround and French doors opening into a rear courtyard.

The kitchen/family diningroom located to the rear of the property is really the heart of the house. Floored, like the front hall, with beige Travertine tiles, it’s a long, very bright, warm space with no less than eight Velux roof windows along with a number of windows along one side.

The kitchen features cream gloss units, timber countertops and a door opening into a courtyard at the side of the house. An arch leads to the dining/family room which has a vaulted ceiling, coal-effect gas fire and plenty of room for a dining table and large sofas for lounging. French doors open into the back patio garden. There’s a fully-tiled shower room off the front hall.

The wide drawing room on the first floor at the front of the house is a reminder of the piano nobile style, when the original grand reception rooms were located on the first floor of older period period properties. This one has two tall sash windows and a large marble fireplace. New owners may like to revamp this as another very grand and elegant bedroom, possibly incorporating an en suite; in fact it is likely they will update bathrooms in the house generally.

The main bedroom is currently located above this room again on the second floor and like it, spans the width of the house, has two sash windows and a fine marble fireplace. There are three other bedrooms, some set out as studies, a shower room on the first return and a bathroom at the top of the house with a clawfoot bath.

The modest-sized rear garden is paved with Indian sandstone, and has original stone walls bordered with raised flowerbeds and a pear tree. There’s also a paved courtyard to the side of the house. The neat, railed front garden is in lawn; there is residents’ permit on street parking.

Number 65 is situated at the junction of Leicester Avenue and Kenilworth Square South, a short walk from the Church of the Three Patrons on Rathgar Road.