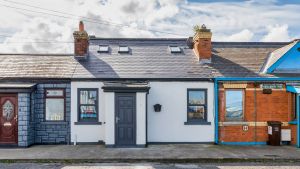 Number 2 Pigeon House Road is home to Martin Treacy and fiancee Susan Sweeney McDowell. The couple purchased the property in 2016 for €255,000, and decided to live in it before undertaking renovations – which were completed in 2019 – to get a grasp of what could be done to the house.

“We knew what was possible as we had been in other properties along Pigeon House Road, so once the finance became available we engaged architect Tadhg Casey to carry out the works. When we bought it, there was no upstairs and it had two small bedrooms on side, with a kitchen and living area on the other,” says Treacy.

Now the property comprises a large open-plan space on the ground floor, accommodating the kitchen, dining and living area, with the two bedrooms and a bathroom upstairs.

The couple also moved the courtyard to the rear – it was originally to the side with the kitchen wrapped around it. “We really wanted that indoor/outdoor feeling and got it by moving it to the back. When the doors are open – as they were through the entire time of lockdown – you get really good sunlight, as it is south-facing and brightens up the entire room.”

To lend a rustic feel, they incorporated a brick wall just inside the front door, and for entertaining purposes installed a gin bar under the stairs.

All the joinery – the kitchen, wardrobes and cabinets – were built by Jim Browne of Browne’s Kitchens and Joinery in Co Limerick – as Treacy is originally from Limerick and Browne had completed work for other members of his family.

The property now extends to 68sq m (732sq ft) and would make a good alternative to city centre apartments, as it is self-contained and a short walk from the city and Dublin Docklands, with the added bonus of the courtyard and playing fields to the rear.

The couple are looking to move to a larger home, and have placed their home in turnkey condition on the market through Owen Reilly seeking €420,000.