Buyers snap up rural properties in one day auction

Coastal Donegal bungalow sells for 2.5 times its reserve of €95,000 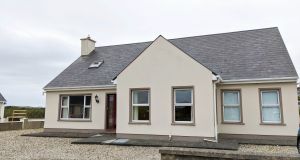 A four-bedroom detached bungalow near the scenic Donegal coastline has sold for almost two and a half times its reserve price in Youbid.ie’s latest national online property auction. 3 The Dunes, Dunfanaghy, Co Donegal had a reserve price of €95,000 but after 135 bids from 12 bidders over three hours it sold for €231,000.

Buyer sentiment was strong among bidders when a bungalow on the Donegal coastline sold for nearly 2.5 times its reserve price following 135 bids in an online auction last week.

The four bed close to the golf club at 3 The Dunes, Dunfanaghy, opened with a reserve price of €95,000 and finished three hours later after 12 bidders drove the price upwards to €231,000.

The Youbid.ie online auction sold 27 of 34 properties for a combined total of more than €1.7 million that included detached and terraced houses and apartments in a range of locations around the country.

“In a busy auction, there were multiple bidders on each of the properties, reflecting the current demand in the market,” said Youbid.ie chief executive and auctioneer Michael O’Connor. “Around 21 per cent of the lots achieved above reserve prices, and further lots are presently under negotiation.”

The Youbid.ie auction model combines an online valuation system, virtual viewings, and a national network of locally based agents.

There was strong in interest in Limerick when six three-bed duplex apartments sold for almost 50 per cent more than their reserve price. The apartments at Mill Falls in Newcastle West had a reserve set of €286,000 but after 144 bids from seven bidders they sold for €423,000. The top floor apartments overlooking the River Arra generate rents of between €500 and €630 per month.

A student apartment at Cratloe Wood Student Village, Old Cratloe Road, in Limerick also sold above its reserve with two bidders pushing the price up from €70,000 to €89,000.

Also in Limerick, bidding for a two-bed, first floor apartment at Cois Teampail, Newcastlewest, Co Limerick, started at €60,000 with three bidders eventually driving the final sale price up to €84,000.