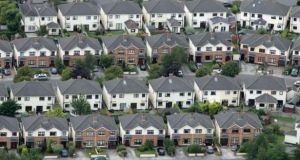 Outer postcodes in Dublin recorded strong sales transaction and value growth in the first half of 2019 while overall the city saw a slowdown in transaction numbers and sales values. Photograph: Frank Miller

There has been a significant slowdown in both the number of homes changing hands in the capital and the value of the related transactions but some postcodes are faring much better than others, according to a study published today.

Dublin 6 recorded the single biggest decline in transactions in the first half of the year with Dublin 20 recording the most significant spike, at least in percentage terms.

The research from MyHome.ie and based on an analysis of the Property Price Register of residential property sales shows that home sales in Dublin 6 fell by just more than 30 per cent year on year with 223 properties changing hands in the area in the first half of the year compared with 319 in the same period of 2018.

By contrast, there was a 73.5 per cent increase in the volume of transactions in Dublin 20 although the numbers of sales in the area were considerably smaller than in D6, jumping from just 34 to 59.

The large difference in sales values in Dublin 6 can be attributed to the sale of the Sandford Lodge Apartments for €49.9 million in June 2018. The sale of new developments such as Marianella in Rathgar also contributed to the increase of sales transactions in 2018.

The study shows that, generally speaking, outer postcodes in Dublin recorded strong sales transaction and value growth in the first half of 2019 while overall the city saw a slowdown in transaction numbers and sales values.

According to the data there were 8,035 sales in the capital in the first half of the year, down from 8,271 during the same period last year. The value of the transactions, meanwhile, dipped by 6.8 per cent compared with the 2018 figures, from €3.8 billion to €3.5 billion.

The number of houses sold rose in eight of Dublin’s 22 postcodes and fell in the remaining 14 with sales staying relatively steady in areas of the county outside of the city, falling by 1 per cent.

The cash value of the Dublin 4 transactions was put at almost €199 million, a figure which represents a 35.5 per cent dip in sales value although that was largely due to the €87.9 million sale of a development at the Gasworks in June 2018.

Dublin 11 saw sales figures rise by 31.9 per cent driven largely by the sale of 45 units at Hampton Wood Square in Ballymun while Dublin 2 saw a 100 per cent increase in sales value, largely due to the sale of a development at Hanover Quay for €84.42 million in June.

Dublin 22 saw sales figures rise by 11.3 per cent, while the value of transactions was up 27.3 per cent. The Ardsolus development at Brownsbarn accounted for 39 of the postcode’s sales total of 217.

Dublin 24 saw sales figures rise by 11.2 per cent while the value of transactions was up 19 per cent. There were 225 sales in Tallaght with the Elder Park/Heath/Heights/Rise development accounting for 54 of these.

Dublin 15 once again represented the busiest postcode for sales, with 742 in the first half of the year. The Hansfield development alone accounted for 68 sales.

“The rise in activity in outer postcodes of the city is welcome and emphasises the increased stock of good properties in these areas,” said MyHome.ie managing director Angela Keegan.

“This bucks the overall trend in the city, where we are seeing house prices and sales volumes fall after years of sustained growth. This may be an indication that we are seeing supply in the city catching up with demand, easing the pressure on inner postcodes. This trend is beneficial for first-time buyers and shows that the market is evolving to meet buyers’ needs.”

The results of the survey chime with CSO figures published last week which pointed to a fall in property prices in Dublin for the first time in seven years. The official figures show the average cost of a home in the capital fell by 0.2 per cent in the 12 months to July.

Prices in Dún Laoghaire-Rathdown – which is the most expensive region in the country in which to buy property and is typically seen as a key indicator nationally – recorded a decline of 6.3 per cent.

The latest figures from the Central Statistics Office show residential property prices nationally rose by 2.3 per cent in the 12 months to July.