How can I get my neighbours to take their waste recycling seriously? 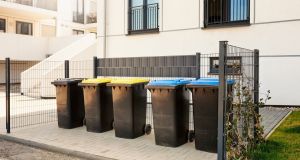 The best way now to deal with waste is that you would have five refuse streams.

I am living in an apartment that my parents bought some years back under one of the Government’s tax incentive schemes. Almost all of the apartments seem to be rented out and I have noticed that there is a low level of recycling of waste by other tenants.

The refuse area is also dirty and unpleasant to visit. Would you have any suggestions on how to persuade people to behave better when it comes to their refuse?

Also, I have noticed that some landlords leave items such as mattresses and furniture in bin areas. Is there anything that we can do to discourage this?

Our management committee agm is coming up in a couple of months and I am thinking of getting more actively involved.

The issues that you raise are common to many apartment developments. It does seem that, for whatever reason, the proportion of waste that is recycled tends to increase the higher the proportion of owner-occupiers there are in a development. Your own development would be typical of many in Irish cities built under urban regeneration schemes – for many landlords, as long as the rent comes in every month, there may be little reason to visit on site or to attend the agm. As such, practical issues that require attention to detail often escape the attention of such landlords.

Waste disposal and bin rooms are important issues as regards quality of life in a development. First of all, it is important that the refuse area(s) are big enough for the bins being stored there and have adequate ventilation. If the original areas put in place by the developer are on the small side, especially with the addition of extra waste streams in recent years, then you may need to see if these can be expanded or an extra refuse area opened.

Awareness of waste recycling has moved up the agenda for Irish households in recent years. Best practice now is that you would have five refuse streams.

First, electronic or battery-operated items should be separated and not mixed with other waste. There has been at least one free service in recent years that has taken such items away and some of the refuse companies also facilitate this stream of waste. Second, there should be one or more glass bins in place. Third, developments are increasingly adopting composting bins, sometimes known as “brown bins”, for organic waste. Fourth, there is the dry mixed recycling bin, which is what many people have seen as the “green bin” in recent years. Finally, there is the residual waste or what is sometimes known as the “black bin”.

Bins from different waste companies are coloured differently and can have different names. It would be helpful to owners’ management companies if the refuse companies co-operated to provide similar names and bin colours. This would not seem to create any competition issues and would be useful around educating residents.

When it comes to organic bins and dry mixed recycling bins, information from official information sources can be found on the internet. I would suggest that, via your OMC (owners management committee) and its managing agent, you discuss this with your refuse company and see if they can provide posters for the bin areas and also reminder leaflets that can potentially go into letterboxes. These should be as visual as possible to convey the message to multiple nationalities and languages.

A common source of questions relates to plastic and the general rule seems to be that people should recycle harder plastics and packaging but plastic “film” as is sometimes wrapped around some products should go into the black bin.

Having obtained this information, you may also wish to draw up some further guidelines. For example, a useful suggestion is to break down cardboard boxes before putting them into the recycling bins as otherwise these cause the bins to overflow. Similarly, try to use the bins furthest from the bin area door first to prevent the bins immediately inside the door from overflowing.

It is worth noting that the good efforts of many residents can be undermined if a small number of owners do not obey the rules. A dry mixed recycling bin may be considered a black bin by the refuse company if even one person has emptied black bin refuse or food or wine bottles into it.

To keep the bin area clean, the refuse company should be asked to wash out all bins at least once a year and more frequently if required. The brief for your development’s cleaning company could also be expanded to include the refuse area in their weekly schedule.

As well as the obvious benefit for the environment by separating different waste streams, there is also a financial benefit for an owners’ management company as other waste streams are generally charged at a lower rate than black bins. Over the course of a year, a good level of recycling can make a sizeable dent in an OMC’s refuse bills.

In relation to owners who leave “non-domestic waste” in the bin areas, such waste involves extra cost to the OMC to get a man with a van to remove it (and secure its safe disposal). To start with, owners should be informed of this and provided with information on local authority disposal sites. Secondly, the OMC could pass a House Rule at its next agm to outlaw this practice. Then, if it is specifically observed as to which apartment owner is doing this, the OMC will be able to bill back to that owner the cost of having the item removed and disposed of safely.

I would also note that some refuse companies have improved considerably the information they can supply to OMCs. As such, if you do get more involved in your OMC, you may be able to co-operate with your refuse company to track recycling levels and hopefully encourage an upward trend.