Irish property market is sixth fastest growing in the world 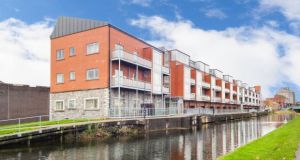 Prices in Dakota Court, Phibsborough, Dublin 7, especially the one-bedroom units, have increased by about €50,000 in the past 12 months

Ireland is Europe’s “austerity star performer”, according to a new survey of global property prices. The study finds that the State was the sixth-fastest-growing property market in the year to September 2017, behind countries such as Iceland and Canada.

However, while prices are expected to continue to rise into 2018, market commentators are forecasting a slowdown in the pace of any increase.

On Tuesday, myhome.ie said house prices would continue to grow nationally this year, with an overall increase of 8 per cent, split between double-digit growth outside of Dublin and a 6-7 per cent increase in the capital. However, tighter Central Bank rules on loan-to-income ratios will probably slow house price inflation in Dublin thereafter.

How do I convince my wife that I’d be a great stay-at-home dad?
6