Growth tailed off sharply from a four-year high in Britain, new figures show 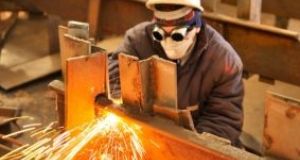 Euro zone factories ended 2017 growing at their fastest pace in more than two decades while performance in Asia was more uneven, with its third-largest economy India leading the field and manufacturing giant China unexpectedly resilient.

With a similar business survey covering the United States forecast to be strong, the synchronised global growth that took hold last year looks set to continue based on the first major economic data releases of 2018.

Euro zone factory activity is handily outpacing its peers, including Britain. That has added to expectations that the European Central Bank, which this month will halve its monthly bond purchases, will shutter the programme later this year.

“The euro zone manufacturing boom gained further momentum in December, rounding off the best year on record and setting the scene for a strong start to 2018,” said Chris Williamson, chief business economist at IHS Markit, which compiles the surveys.

The December euro zone final manufacturing Purchasing Managers’ Index (PMI) was 60.6, matching an earlier preliminary reading, the highest since the survey began in June 1997. Any figure above 50 represents growth.

The factory output index, which feeds into a broader set of data including services due on Thursday, rose to 62.2 from 61.0 in November. That was its highest in over 17 years and a reading exceeded only once in the survey’s more than two decades of history.

Germany and France, the euro zone’s two largest economies look to be expanding in tandem, striking their highest manufacturing PMI numbers on record and for 17 years, respectively. But growth slowed in Italy, the EU’s third largest economy.

In Britain, which is in the process of negotiating a withdrawal from the European Union, growth tailed off sharply from a four-year high the previous month.

“Strong growth will be hard to sustain in 2018,” noted Samuel Tombs, UK economist at consultancy Pantheon Macroeconomics. He pointed out that the UK PMI had underperformed the euro zone’s by the most since June 2008.

“British manufacturers ... are failing to make the most of the rebound in global trade,” Mr Tombs wrote.

Factory activity hit a five-year high in India and the best in over six years in Taiwan, and also picked up in China. But activity contracted in South Korea, Malaysia and Indonesia, a sign that regional interest rate hikes are likely to be gradual.

In China, manufacturing growth unexpectedly picked up to a four-month high in December amid a surge in new orders, suggesting continued strength in global trade.

The Caixin/Markit Manufacturing Purchasing Managers’ Index (PMI) rose to 51.5 from 50.8 in November, and far outpaced expectations in a Reuters poll for a dip to 50.6.

The China PMI, which pushed Asian shares to their highest in a decade, was somewhat at odds with a much larger official China PMI survey on Sunday. It showed a slowdown in growth amid a crackdown on pollution and measures to curb risky financing and cool the housing market.

The difference, analysts say, stems from the fact that the Caixin/PMI index tracks smaller, private firms, more sensitive to exports.

China is expected to have grown by close to 7 per cent in 2017, but the world’s second largest economy is likely to slow in the new year on the back of those measures, highlighted as policy priorities at October’s key Communist Party congress.

Beijing is expected to target 2018 growth of around 6.5 per cent.

“We believe a moderate growth slowdown to be more visible in the first half of 2018, especially on the investment front, due mainly to the tight financial conditions and a cool down of the property market,” BofA Merrill Lynch economists said.

China’s slowdown means that for the rest of Asia, the pace of rate increases is unlikely to match that of the US Federal Reserve, which is likely to raise interest rates three times this year, and possibly more.

There will likely be “only a few rate hikes here and there across the region over the coming two years,” HSBC analysts wrote in a note, even as they expect Asian economies to keep chugging along in 2018, led by tech and trade.

India’s PMI showed factory activity expanding at the fastest pace in five years, buoyed by a rise in output and new orders, which allowed firms to raise prices. The data firmed up views that interest rates in Asia’s third-largest economy have probably bottomed.

PMIs for Japan, which surpassed growth expectations in 2017 on the back of the surging tech and trade cycle globally, will be released on Thursday.

1 Why gift a son now if it eats into his tax-free inheritance threshold?
2 Chris Johns: Economic self-harm is the root of populism
3 Government to avoid ‘cliff-edge’ on Covid-19 payment changes
4 Flights abroad ban could last all summer
5 UK expected to phase Huawei out of 5G network
6 Ireland faces 'deep downturn' this year and may not rebound until 2024 if there is a second wave
7 David McCullagh announced as co-host of RTÉ Six One News
8 Half of investors believe market underestimating crisis, survey shows
9 How much do Irish people earn? And what will Covid-19 do to our wages?
10 How to further divide the economy using the wage subsidy
Real news has value SUBSCRIBE