House prices rose by an average of 50% in five years

House prices nationwide have risen by an average of almost 50 per cent since their lowest point five years ago and are expected to increase again in 2018, according to a MyHome.ie report. 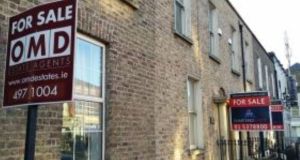 Prices have risen to less than 10% below their 2007 peak in some urban areas.

House prices nationwide have risen by an average of almost 50 per cent since their lowest point five years ago and are expected to increase again in 2018, albeit at a slightly lower rate than seen in recent years.

MyHome.ie says house prices will continue to grow nationally this year, with an overall increase of 8 per cent, split between double-digit growth outside of Dublin and a 6 to 7 per cent increase in the capital.

According to the MyHome study, asking prices fell back 1 per cent nationally during the final three months of last year and by 0.4 per cent in Dublin. Over the year, prices were up 11.1 per cent in Dublin with the median price standing at €330,000 at the end of the fourth quarter compared with €195,000 outside of the capital.

The study shows the number of properties listed for sale fell to a record low of 18,900 at the end of 2017. This is equivalent to less than 1 per cent of the overall housing stock. MyHome managing director Angela Keegan said that while market transactions rose 10 per cent to about 55,000 last year, the lack of fresh housing supply was evident. A fully-functioning market would be seeing about 90,000 transactions a year, she said.

The Daft.ie report indicates property prices nationwide have risen by an average of 47 per cent, or just over €76,000, since their lowest point in 2013. This is good news for homeowners in some urban areas, such as Sandycove, that have seen prices rise to less than 10 per cent below their 2007 peak.

Other areas that are nearing their previous peaks include Grand Canal Dock, Raheny, Stoneybatter, Lucan, Kimmage, Milltown, Clontarf, Skerries, Sallynoggin and Castleknock, all in Dublin.

Outside of the capital, prices on average are still 45 per cent below peak values, although there are exceptions, such as north Limerick city and Ballincollig in Cork city, which are rebounding at a faster rate.

The Daft report indicates prices rose 11.7 per cent in Dublin on average last year and increased by 5.1 per cent in Cork, 8.1 per cent in Galway, 6.9 per cent in Limerick and 8.6 per cent in Waterford. Outside the main cities, property prices were up 7.5 per cent compared with the previous year.

“The overall picture of the market remains one of strong demand but very tight supply, in particular of new homes,” said economist Ronan Lyons, the report’s author.

While noting that Ireland is the least urbanised country in Europe, Mr Lyons said demand was considerably higher in and around cities, something which he said would have consequences in the future.

“As Ireland goes from 65 per cent urban to 80 per cent or 85 per cent over the coming few decades, this will create huge additional demand for housing in and around its major cities. If we as a country get that wrong we will be stuck in a sprawl model, with implications for family life and environmental sustainability as well as for the housing market,” he said.