Recruitment, GDPR and Brexit among firms’ biggest concerns for 2018

Other worries highlighted include infrastructure problems and traffic congestion 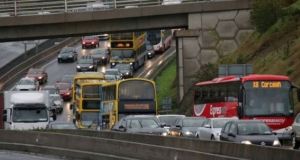 Attracting and retaining staff is the biggest business concern for Irish companies, according to a new survey that also shows firms are worried about the impact of new data protection that comes into force later this year.

The Dublin Chamber study of more than 200 companies shows that with employment rebounding, companies are increasingly worried about getting and keeping key staff members. In the survey, some 69 per cent said it was their biggest concern going into 2018.

Also high up on the list of concerns is the General Data Protection Regulation (GDPR), which comes into effect in May. As many as 62 per cent of firms surveyed said they were worried about the impact the legislation will have on their business.

The regulation, the biggest data protection legislation to be passed in the history of the European Union, governs the privacy practices of any company handling EU citizens’ data, whether or not that company is located in the EU. It also requires that public authorities and certain companies processing personal data on a “large scale” must have an independent data protection officer.

Approximately 23 per cent of companies said they were unprepared for GDPR going into 2018 while a further 60 per cent said they were “quite prepared” for the legislation.

Businesses were particularly critical of the Government’s performance in solving Dublin’s infrastructure issues. Some 85 per cent said politicians weren’t doing enough to ease pressures in the capital, particularly around housing.

The vast majority of firms who responded to the survey expressed optimism about 2018. More than four out of five firms stated that they expect revenues to increase this year with just 5 per cent of those surveyed forecasting a drop in sales.