BP expects to take $1.5bn charge after recent tax changes in US

Despite the initial payout, the British oil giant expects long-term gains from the legislation 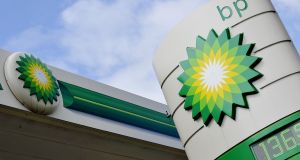 “The lowering of the US corporate income tax rate to 21 per cent requires re-evaluation of BP’s US-deferred tax assets and liabilities,” said the London-based firm. Photograph: PA

BP Plc, the British oil major that invests more in the US than anywhere else, expects to take a charge of about $1.5 billion following recent tax changes in the country, despite the prospects of long-term gains from the legislation.

“The lowering of the US corporate income tax rate to 21 per cent requires re-evaluation of BP’s US-deferred tax assets and liabilities,” the London-based company said. “The current estimated impact of this will be a one-off non-cash charge” affecting fourth-quarter 2017 results.

Overall, BP said it reckons “future US after-tax earnings to be positively impacted by the recently-enacted changes to US corporate taxes” as a result of the reduction of the federal corporate income tax rate to 21 per cent from 35 per cent.

BP said the charge would be due to a re-evaluation of its US deferred tax assets and liabilities – something that has been cited by several other companies.

The sweeping tax reform that was a key campaign platform of US president Donald Trump, and was passed in late 2017 by a Republican Congress, is seen by many Wall Street analysts as a long-term boon for companies operating in America because of the reduction in the headline tax rate.

However, the Bill also included a slew of tax-law changes that companies will be required to account for in the period in which the Bill was signed, according to accountants at PricewaterhouseCoopers. That means publicly traded companies are expected to make announcements about the effect of the taxes in the fourth quarter when they begin unveiling their results later this month.

The Bill “will have pervasive financial reporting implications, both in the period of enactment and on a prospective basis”, PwC said in a report.

Royal Dutch Shell Plc said last week that the charge may be as high as $2.5 billion. The Anglo-Dutch oil producer is scheduled to announce fourth-quarter results on February 1st, while BP will report on February 6th. – Financial Times Service and Bloomberg