Rising US oil production is only factor hampering outlook into 2018

The death toll after six days of demonstrations in Iran has risen to at least 20 people. Video: Reuters 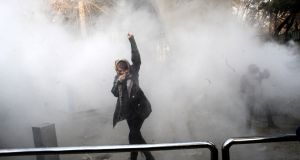 Iranian students clash with riot police during an anti-government protest at the University of Tehran. Photograph: EPA/STR

After capping its second annual gain, oil started 2018 by advancing toward $61 as US drilling activity remained at a standstill following a slip in production and as protests continued in Iran.

Brent for March settlement gained 26 cents, or 0.4 per cent, to $67.13 a barrel on the London-based ICE Futures Europe exchange. Front-month prices rose about 18 per cent last year for a second annual increase. The global benchmark crude traded at a premium of $6.50 to March WTI.

It was the first time since January 2014 that the two crude oil benchmarks opened the year above $60 per barrel.

“Growing unrest in Iran set the table for a bullish start to 2018,” the US-based Schork Report said in a note to clients on Tuesday.

Anti-government protesters demonstrated in Iran on Sunday in defiance of a warning by authorities of a crackdown, extending for a fourth day one of the most audacious challenges to the clerical leadership since pro-reform unrest in 2009.

Even without the unrest in Iran, which is a major oil exporter, market sentiment was bullish.

The 450,000 barrels per day (bpd) capacity Forties pipeline system in the North Sea returned to full operations on December 30th after an unplanned shutdown.

Oil markets have been supported by a year of production cuts led by the Middle East-dominated Opec and Russia. The cuts started in January 2017 and are scheduled to cover all of 2018.

US commercial crude oil inventories have fallen by almost 20 per cent from their historic highs last March, to 431.9 million barrels.

“We would not be surprised to see a further (oil price) rise,” said Sukrit Vijayakar, director of energy consultancy Trifecta.

Only rising US production, which is on the verge of breaking through 10 million bpd, is somewhat hampering the outlook into 2018.

1 Why are markets booming when a crash is on the way?
2 Your old car could be telling others all your personal data
3 Permission sought for €150m film and media campus in Wicklow
4 Drink tax row; no respite for Bewley’s; and mortgage U-turn at AIB
5 AIB U-turn on mortgage block for those on Covid wage subsidy
6 Covid-19: Publicans and restaurateurs row over calls for VAT cuts
7 Staff at Bewley’s cafe on Grafton Street are made redundant
8 Government committed to finalising roadmap for safe overseas travel ‘shortly’
9 Dunnes Stores trials online ordering from Cornelscourt outlet
10 No free lunch on coronavirus cash payments
Real news has value SUBSCRIBE