Under wraps: Swaddle up with these brilliant blankets

Home Front: Supersoft throws will see you through the transition from autumn to winter 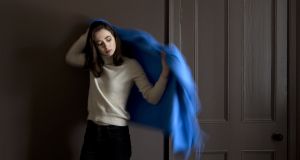 Cool, damp evenings call for the warmth of a throw that can do double duty as a room accessory and a cosy wrap. Luckily there’s plenty of choice from Irish designers and weavers, while eagle-eyed shoppers can also pick up vintage Foxford or Avoca blankets for a relative song from charity shops (a bath in Woolite will revive these scratchy finds, making them acceptably soft; a mix of glycerine – available from pharmacies – and white vinegar will do the same job).

Thankfully, contemporary blankets come in much softer wool mixes, with combinations of lambswool and merino wool, with cashmere and alpaca adding to the mix in more expensive blankets.

The Ketzal Blanket company takes its name from the resplendent quetzal, an exotic bird that is also a devoted father. What’s the connection you might ask? Ketzal’s founder Audrey Brennan was inspired by a special blanket that her father gave her daughter, as a reminder of home, when she went away to college. The sentiment, and the cosiness of the blanket, sparked an idea and the Ketzal blanket was born. Made from supersoft alpaca, the blankets come in luxurious packaging and have become a popular pampering present for a loyal international customer base, according to Brennan. The blankets are stocked in the boutiques of luxury hotels such as Adare Manor or Ballyfin, but can also be got online at www.ketzalblanket.com. The one in cobalt pictured above costs €325.

Stable Ireland beside the Westbury Hotel has produced a pure merino wool blanket to a 1950s design by Patrick Scott. Scott originally based his design on the colourful motifs painted trompe l’oeil style on the exteriors of traditional Irish pubs. The blanket is a collaboration between the Patrick Scott estate and Molloy and Sons, a family weaving business in Co Donegal. It costs €620. See stableofireland.com

Neptune’s deep inky bluey grey wool throw works well in this fashionably dark sittingroom that’s all set for a winter’s evening. It’s seen here with a classic armchair covered with a nubby navy-blue tweed wool. Called the Hadleigh, the throw costs €305. See neptune.comThe classic herringbone pattern is a hit with owners of pared-back interiors who want extra texture but not too much pattern. Avoca, which is famed for its more colourful throws in checks and stripes, has this quiet cream and grey heavy herringbone blanket, ideal to throw across the end of the bed on chillier nights. It costs €119.

Foxford is best known for its range of blankets in reversible designs of dots and checks, but this creamy white mohair-mix throw will add a definite sense of luxe and warmth. It’s currently available from Arnotts at €124.

While Irish eyes are looking east to Japan for the rugby it’s worth reflecting on the host nation’s influence on the way we live in our homes.

Your open-plan living area with its screened-off zones using pocket doors has its origins in the shoji screens that were used as room dividers in traditional Japanese homes, and the bento-style lunchboxes that we now all use to eat al desko also originate there.

“It’s a rich culture for art and design,” says Dr Mary Redfern, curator of the East Asian collections at Dublin’s Chester Beatty Library, “whose composition, use of space and graphic quality, coupled with its incredibly powerful craftsmanship and use of materials has appealed to everyone from Victorian designers to modernist architects”. Our own Eileen Gray’s love of lacquer was borne of a meeting with Japanese lacquer master Seizo Sugawara in Paris in 1906.

Chester Beatty, whose collection can be seen at a museum named after him in Dublin Castle, first visited Japan in 1917 with his wife Edith and daughter Ninette. There he began to collect Japanese story scrolls and albums, luxurious works retelling popular tales, and beautifully decorated in gold and with elegant calligraphy, Redfern explains. He began to collect Japanese prints in earnest in the 1950s – after he’d established his library in Dublin. One on display at the moment is the story book Fat Tales of Lucky Mice (1804), a playful colour woodblock-printed book that tells the story of a love triangle between mice.

There are innumerate contemporary names to know about. Furniture retailer Barry Rochford is a fan of Oki Sato, better known as Nendo, who recently collaborated with Bo Concept on an origami-inspired collection of seating called Fusion. Nendo’s credo is that design should make you happy. He pushes boundaries and his thinking is far more holistic than most product designers. Another name to watch is Tokujin Yoshioka, whose design for the Olympic torch for next year’s Tokyo Olympics is inspired by the form of the nation’s favourite flower, the cherry blossom. It has been made using aluminium construction waste recovered from temporary housing built after the 2011 east Japan earthquake and through the use of aluminium extrusion technology, which is also used to manufacture Japanese bullet trains.

On a far more everyday note, Muji, the brand whose minimal packaging on everyday products was light years ahead of the rest of the high street, is also worth a visit. It remains an organisationalista’s dream shop. Its array of cleaning brushes and components, from about €6.95 for a mop head upwards, give some insight into the nation’s love of order – a love that has given us Marie Kondo.