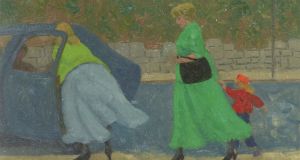 Listed among the 173 lots are 12 paintings by Patrick Leonard HRHA, who died in 2005. Leonard studied fine art under Seán Keating and Maurice MacGonigal at the Metropolitan School of Art in Dublin (today the National College of Art and Design).

His realist genre paintings incorporate scenes of everyday Irish life, from an Aer Lingus hostess aboard a plane, to classroom studies, to Irish Sunday Mass scenes.

In 2016, his oil on canvas A Hot Day in Rush, depicting crowds sunbathing on an Irish beach, provided the biggest surprise at Whyte’s October sale, achieving €18,000 – more than double the lower estimate of €8,000.

The bulk of Leonard’s work in this sale, which includes pieces being sold by the artist’s family, is in the €600-€900 price bracket, with some larger pieces priced from €1,000-€1,500, and may well attract attention from collectors.

Also listed are 20 works by George Campbell RHA, which come from the artist’s estate.

Campbell was a founding member of the Irish Exhibition of Living Art, and won, among other awards, the Douglas Hyde Gold Medal in 1966 and the Oireachtas Prize for Landscape in 1969. In 1977, he was even honoured as a Knight Commander of Spain.

The subject matter and mediums are broad and include pastels, watercolours and oils, encompassing landscapes and portraits, including the delightful Skipping (€600-€900). Smaller watercolours are listed with estimates of €200-€400, while larger oils fall into the €1,000-€2,000 bracket.

Last month, Woman with Red Hair, by Irish avant-garde artist May Guinness, caused a stir when the painting, which had an estimate of €6,000-€8,000, was purchased by a Californian collector for €34,000 at a Whyte’s sale, perhaps finally giving the artist international recognition.

Her Breton Women, though not a modernist piece, but from her time in France, where she was heavily influenced by Matisse, Raoul Dufy, and Picasso, is listed here at €1,000-€1,500.

An Seanachi, Inisheer 1944, painted by Neapolitan artist Gaetano de Gennaro during his time in Ireland – essentially as a refugee during the war – is seeking €6,000-€9,000. De Gennaro painted many portraits of Irish figures, most notably a portrait of Douglas Hyde, which now hangs in Áras an Uachtaráin.

One of the subjects in An Seanachi, and the original owner of the work, is Theresa Long – a student who had just finished her Leaving Certificate, and was on holiday on the island.