Roebuck Hill House with eight bedrooms, a mature walled garden and pool on 1.2 acres was bought at auction in 2014 for €1.19 million 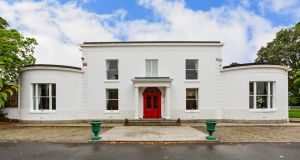 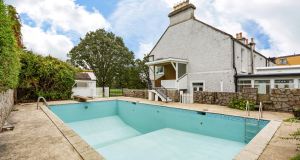 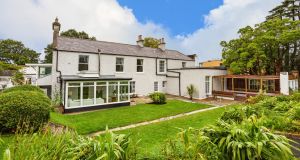 In 1962 Roebuck Hill House in Clonskeagh, Dublin 14 made property headlines when it was sold to property developer JJ Jennings and his wife Anne for £13,000 making it the most expensive house in Dublin that year.

It was quite the property, a rambling Georgian with a gate lodge and outbuildings on a vast site of gardens and paddocks, its lands stretching down to Roebuck Road.

The luxurious property – later a swimming pool was added – was home to the couple and their 12 children. When it next sold in 2014 it was in need of restoration and was no longer the secluded estate, on an elevated site with city views, it once was.

There was pre-auction talk at the time that the house would make an ideal medical centre of some sort (subject to planning permission), with so many fine rooms and parking for a dozen cars.

In the end it was sold as a family home, the new owner taking on the restoration of the house’s many fine details – notably the detailed rococo ceiling plasterwork in the main reception rooms. Dramatic high ceilings were discovered in several bedrooms which had over the years – probably in the 1970s – false ceilings installed to try to keep the place warm.

The front door opens into an oval-shaped hall, doors placed symmetrically in classic Georgian style; the original floorboards, doors and sash windows all remain in place.

Not long after it was built the house was extended on each side with two single storey bay wings added – in each is a grand room perhaps intended for a small ballroom and a billiard room. They are now formal and very grand reception rooms, in addition to three more informal ones elsewhere.

In 1860, when Roebuck Hill was advertised to let as a gentleman’s residence in The Irish Times, it was stated that the house had four “bedroom chambers” – it is now listed as having eight (four with recently added en suites), though few domestic buyers are likely to want so many.

Recent improvements include a smart new eat-in kitchen, and sizeable utility room, as well as a redecorated family bathroom. The conservatory, there since the previous owner’s time, is still used, though one of the house’s long-gone but most fascinating features, the early 19th century orchid greenhouse with its own central heating system is just a shell.

The mature walled garden filled with shrubs and colour is lovely and secluded. Also in the garden is a newly finished self-contained unit.

The summer has seen a flurry of activity at Roebuck Hill House. Every single room has been painted, with a colour palette restricted to glossy white and calm greys, and new carpeting has been laid. The house is being shown fully furnished and so looks its best.

The house is at the end of a long drive via the original wrought iron gates on Mount Anville Road. A line of planters have been set with trees in an effort to provide some privacy from the apartments opposite although their large glazed windows do overlook the front of the old house; the back though, where the swimming pool complete with its original 1970s diving board, is private as is the side, walled garden.

Roebuck Hill House, a protected structure, is for sale with Sherry FitzGerald for €1.95million.

The Kerryman working for a charity in Melbourne: 'It's a challenging time'
5