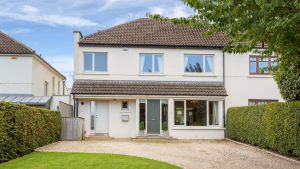 Buyers of suburban semi-ds with good gardens seeking to update and extend tend to build across the rear, push out to the side or go up into the attic. If they’ve a big enough budget, they do all three which is what the owners of 2 Stillorgan Park, Blackrock, did about six years ago to suit their growing family.

The house now has 242sq m/2,600sq ft with four beds (one with en suite) plus an attic conversion where a room is used as a fifth bedroom. However it is the well-designed, light-filled, open-plan, living-kitchen-dining area at the rear that sets this house apart from other semi-ds on sale.

The architect was particularly keen on large Velux windows and there are eight in the pitched roof of the 9.3m by 5.4m room. Add the glazed wall with two oversize doors opening to the southwest-facing garden and it’s a bright, airy space. The simple bespoke timber kitchen is painted an attractive fern green and there is a large island unit and plenty of storage.

Two rooms open off the kitchen: a playroom looking out on the back garden and a large utility created by converting what was originally a side garage at the front. The garage door was replaced with a single timber door. Above this is a new family bathroom. The two reception rooms originally were separate – now they interconnect and feature reproduction cast-iron fireplaces and walnut flooring. Also downstairs is a guest toilet. Upstairs three of the four bedrooms are doubles with picture windows adding to the feeling of space. Up at attic level, adjacent to the room used as a bedroom, is an area used as a home office.

As well as a sizeable rear garden with sandstone patio, there is a long front garden so the house is set well back on this quiet suburban road in an area very popular with families due in part to the choice of schools within striking distance.

There is plenty of off-street parking in the recently landscaped garden. Throughout the interior, the colour scheme is neutral and has been updated since the renovation so buyers should find little needs to be done. Number 2 Stillorgan Park, Blackrock is for sale through Vincent Finnegan for €1.25 million.