Róisín Lafferty : ‘Design can be hugely impactful on people’s lives’

Since starting her studio in 2011, she has become a creative force in the interiors industry 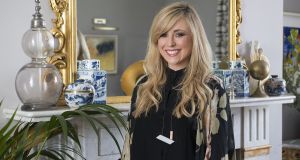 In the space of just eight years Róisín Lafferty’s interiors agency Kingston Lafferty Design has already brought numerous accolades to the young designer, and has grown to be a thriving business employing 12 people.

In the past year alone, KLD has won retail Fit Out Project of the Year; scooped a prize at the Architecture Masterprize awards and an award at the Restaurant and Bar Design awards. Lafferty was named Image Interiors and Living Interior Designer of the Year, and has been longlisted in the Emerging Interior Designer category at the international Dezeen Awards. To top it all, she became the youngest ever President of the Institute of Designers of Ireland.

It all started from an early age. From as young as she can remember, Lafferty was always colouring and drawing. She grew up with her grandfather playing an important role in the nurturing of her artistic talent. Grandad Henry would collect her from primary school to take her to galleries around Dublin. Encouraged by him and her mother, Lafferty always knew that creativity would play a part in her future life.

Studies in fine art didn’t appeal to the practical side of Lafferty’s nature. After doing part-time jobs since the age of 15, she knew that being an artist often didn’t pay the bills. She signed up for a degree in Interior Architecture and Design at DIT, followed on with a master's in product and spatial design at Kingston University, London, where she was, she says, pushed to the limits.

“In Ireland you’re taught that if you work hard and do a good job you will succeed. In London I was pressurised into striving for more.”

And strive she did. Selected as one of just a few graduates, she exhibited at the prestigious London Design week, stretching the boundaries with a project inspired by a terminally ill friend. She initially started trying to create a living space that would develop as her friend’s illness deteriorated. As the project progressed, the focus shifted to exploring ways to look at improving levels of comfort for people with degenerative illness.

“I realised that design has the potential to be hugely impactful in people’s lives. Hospital studies, for example, find that people with views of a garden rather than a wall recover more quickly, with less pain relief.”

The psychology of space is at the heart of her business along with a strongly held belief that creativity is central and she should have the freedom to express herself. While she engages with clients and wants to understand their vision, building a relationship of trust where she is given the creative freedom to put her own distinctive stamp on a project is crucial.

“Obviously it varies depending on the space. In a commercial job there can be more scope to be creative, so long as you achieve the objectives of understanding it’s about making a space that will draw revenue. In a hospitality situation you want to create environments people want to spend time in and go back to.”

Homes can create a more nuanced set of challenges. With advances in technology and lines blurring around working and home life, some clients might, for example, want a home that is the antithesis of a work environment.

For Lafferty and her team, one of the most interesting recent projects they have undertaken was the design of their own office space.

“We wanted an office that doesn’t look like an office. We’re in an old Georgian building that doesn’t have a straight floor or angle throughout. So what we did was make it look and feel like a townhouse or boutique hotel. It’s a pleasant place to work and says something to clients about who we are.”

Flipping conventions around how a space should be presented is all in in a day’s work for Lafferty. An office might look like a boutique hotel. A kitchen space might, in Lafferty’s hands, look like a cafe.

“A lot of our clients like entertaining and want to encourage that sort of engagement in their home. So it’s about trying to interpret an atmosphere. In that situation, we would draw inspiration from cafes or restaurants. I would ask people where they like to spend their time, and try to break that down.”

Understanding who the client is, says Lafferty, is about knowing that we all have an aspirational version of who we want to be. So, while she is trying to extract a brief for a project from somebody she will attempt to understand how far into the aspirational they want to go.

“If I was doing a design brief for my own home, the aspirational version of me would like to like to think I’m not messy, but real me is! With clients I try to pry a little to understand.”

Having worked on projects that featured in Vogue and Elle and won awards in London and Bilbao, Lafferty wants to see more Irish design featuring on the international stage and that will be the focus of her work this year as president of the Institute of Designers in Ireland.

“There’s so much Irish design talent that’s not known further afield. My key ambition is to create the best design event in the country to showcase the best in Ireland, internationally.”

The event is already in the planning stages. In the hands of this driven young designer, we might very well watch this space.

'I contracted the virus, and then I lost my mum'
7