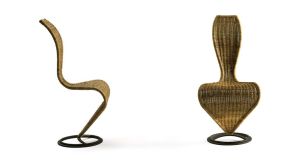 Rarely has one single design formed the basis of a major, globally successful and critically acclaimed career but the S-Chair created by self-taught British designer Tom Dixon (b.1959) in the mid-1980s is one such piece.

He had been making a brutalist line in welded furniture when he got the inspiration for the curvy delicate looking S-chair. He has said it came to him from a doodle of a chicken though it also nods to the great Verner Panton’s curvy plastic 1960s chair.

Now produced in many materials and colours - by Italian company Cappellini the first major company to spot Dixon’s talent - the S-Chair was originally made with a steel frame and a seat and back made from woven straw.

The mix of tactile craft and modern steel in an elegant sculptural form was viewed as startlingly original. Now the head of his eponymous global design firm, and with works in all major collections including the Museum of Modern and the Victoria and Albert Museum, Dixon has said of his S-Chair: “The secret of its success, I believe, was creating an unexpected and unconventional shape in an archetypical comforting material.”