How do you like this apple house in Cabinteely for €1.35m? 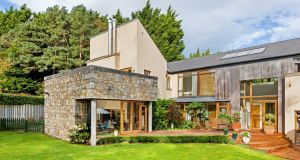 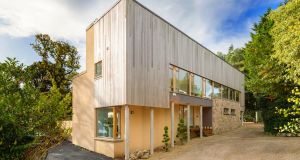 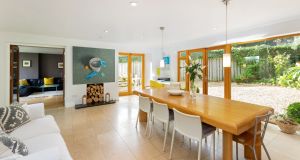 The Apple House sits on an elevated site to the rear of the Holmwood development on Brennanstown Road in Cabinteely. Taking its name from an old summer house, which ended up as an apple store for a nearby period home, it was in such a state of disrepair the owners had a blank canvas to build a new home.

Built over a two year period between 2000 and 2002, the 279sq m (3,003sq ft) house designed by RKD Architects takes its inspiration from mid 20th century American architecture. “We were given lots of books from that time, and as the site is surrounded by trees, I really wanted something that looked like a forest setting,” says the owner who is now downsizing locally.

The objective of mid-century design, to embrace the relationship between a house and nature, has been achieved by the use of large windows and an open floor plan, along with the two main themes of modernist architecture, that of clean lines and minimal ornamentation.

The setting, whereby the house is surrounded by mature pine trees - and a holly tree which soars to a height taller than the house, and would make a greener alternative to a Christmas tree – has been enhanced further by planting of Gunnera and New Zealand flax which give an almost tropical through the myriad of full height windows and doors throughout. A Cornus Capitata, with its creamy white bracts followed by quirky strawberry-like fruit in autumn, adds much interest to one corner of the 0.25 acre site.

The installation of a new fence between the site and two neighbours will need a hedge to give more privacy on one side. On the other, the house is only partially overlooked by a pool house of an adjoining property.

Internally there is a lovely bright peaceful feel about the place. The eat-in kitchen has no upper presses facilitated by a large walk in pantry and utility room,  and even the island sits on a pedestal base further enhancing the flow of light.

Off the kitchen, accessed by double doors, is the summer dining space which benefits from a west-facing garden.

Adjacent to the kitchen lies the family room, which also has access to the garden and leads to a tiered deck which connects the formal living room, again incorporating the garden into the fundamental design of the house.

This formal room located off the main hallway is sunken to achieve maximum light and aspect from the garden. Though a sandstone fireplace takes centre stage, as does a further fire in the kitchen, they are rarely used due to the abundance of passive heat through the windows according to the owner.

Up a curved travertine staircase lie five bedrooms, all of which are doubles and two share an upper terrace, but as one would expect it is the principal bedroom that steals the show.

It is more akin to a suite with its own private balcony along with a dressing room and en-suite, and the views of the towering trees are used to good effect from the many windows.

Sherry FitzGerald is seeking €1.35m for the house which is in turnkey condition.

Return to the wild: How to go wild camping in Ireland
7