Deerfield on Sandymount Avenue has nice apartments ranging in price up to €2.5m 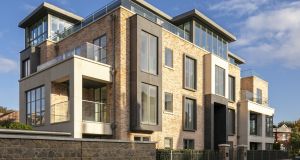 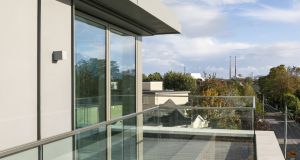 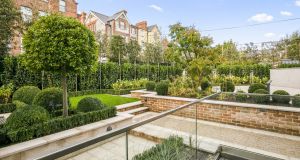 When solicitor and developer Damien Tansey bought numbers 78 and 80 Merrion Road and their respective mews houses for €5.5million in 2015 he purchased a pair of stately, but down-at-heel, red bricks.

Over the next two years he set about remodelling and restoring them, with works executed by Brazil & Associates and builders Whelan and O’Keeffe, to a superb finish. Instead of selling them, he’s rented the five-bedroom, four-storey homes and both are renting for well but now at about 20 per cent less than the €13,000 per month first advertised.

With his contemporary, four-storey boutique block of just nine apartments, Deerfield, built on the mews sites to the rear, he’s targeting down-sizers, “a lot of whom have already looked at the properties, attracted by the location and quality build in what is the Knightsbridge of Dublin,” he says.

The block is built in a contemporary style to link the traditional four-storey houses with the smaller scale mews and two-storey houses on Sandymount Avenue, architect Paul Brazil explains. Kilcawley contractors executed the idea.

The exterior’s stepped-back elevations feature soft tumbled brick and large alu-clad projecting bay windows, by Velfac, providing snapshots of the leafy surroundings and its landmarks, which include the Aviva and the Pigeon House towers.

The double height entrance is clad in honed black limestone with panels of lighter Jura limestone, supplied by Ballinasloe-based Cregg Stone, providing contrast. Inside the eight-foot tall front doors of each unit and walnut stair railings by Fire Doors & Joinery draw the eye up.

The lighting is by Wink and includes smart pencil shaped lights on either side of the large, walnut-framed mirrors in the bathroom and integrated light-cum-door number outside each residence.

The bathrooms have Alape sinks and Duravit sanitryware, supplied by Navan-based Versatile, with textural walls and wet room areas made of bands of honed and unhoned marble tiles supplied Tilestyle. The hardware is by Dornbracht.

The soft nutmeg-coloured Siematic kitchens have rubber-lined, self-sealed doors to keep them dust free as well as self-closing drawer doors. Seamless Corian counters and splashbacks, in a concrete colour, give a very uncluttered feel while the counters have sharknose edges, Miele appliances, including a downdraught extractor, Blanco sink and Qooker hot water tap.

There is underfloor heating throughout with an electric, flame-effect, Gazeco fire fitted into limestone surrounds by Jamb in every unit.

The Harwood Floor company installed the engineered smoked and white oiled floors while Husswood Joinery did the wardrobes.

The three-bedroom penthouse, 159sq m / 1711sq ft, which occupies the entire third floor, is impressive. Clad in zinc and glass it has more than 56 metres of outside terraces, air conditioning and a Beaux Arts style of Siematic kitchen that has polished nickel drawers and internally lit glass-fronted cabinets above. It is asking €2.5million.

Outside the landscaping of the south-west facing garden is by Karl Barnes of Formality and features oatmeal granite from Wicklow Miller Brothers, ornamental bay trees and a boundary of pleached tree. The soft planting is by Aspect landscape Design.

Each apartment comes with one car parking space and a separate storage unit of about 10 cubic metres. Each has its own PV panels that can, on average, contribute 10 to 15 per cent towards the electrical loading or running costs of each apartment, according to the mechanical and electrical contractors Johnston Reid & Associates.

Sandymount Dart station is less than a 50-metre walk while you can catch several cross town busses, including the Aircoach, from the Merrion Road, a similar distance on foot.