Fortune will favour the brave at Baldoyle seaside house for €695k 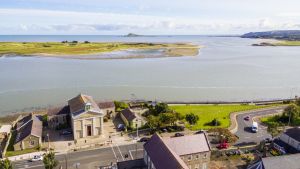 Located just a few blocks west of Sutton Cross, Baldoyle is a part of north Dublin that doesn’t get nearly as much tourist attention as the nearby buzzy picturesque harbour of Howth. It would seem there is an opportunity here to develop some of the restaurant and cafe culture of its fishing sister village.

Baldoyle is home to an impressive Roman Catholic church dating to 1830 and, contrastingly, a contemporary library designed by FKL Architects. For the most part, its picturesque seafront is obscured behind single- and two-storey buildings, save for a small green area where bench seating offers good sea views.

Stella Maris, Star of the Sea, is the name given to an unassuming detached bungalow that adjoins the boundary of St Peter and Paul Church on Strand Road. At 29 Main Street, it is located next door to the church and was once the parochial house.

The original part of the house dates back to 1889. Its four rooms have good ceiling heights of almost 3.5m with windows on one side now overlooking the car park of the church next door. Two of these rooms interconnect and have open fireplaces and the other two could be bedrooms.

The current owners bought the property in 1948 and the simple original structure has been complicated somewhat by numerous extensions, starting with a long glass sunroom to the front and an avocado bathroom at the end.

A narrow stairs leads up to a lovely attic room with a gable window overlooking Baldoyle main street.

There is a dual-aspect kitchen and an adjoining garage at the other end of the house, in another extension, with another bedroom off the kitchen and a bathroom adjacent.

It is clear that the property needs complete refurbishment and at present only one window has sea views.

The next owner will probably wish to change that and there is potential to reimagine the existing house by possibly incorporating a two-storey stone outbuilding of around 24sq m/258sq ft into its plans. Alternatively there could be scope for two houses on the dog-leg shaped site which has about 22m/75ft of walled sea frontage.

Those worried by coastal erosion should note that there is a public walkway to the rear of the property, between the house and the sea, owned by Fingal County Council. It is currently gated but the stretch beyond is open to the public and leads almost all the way up to Sutton Cross Dart station.

The property is seeking €695,000 through agent Lisney and will require a talented architect to maximise this unique plot with a south-westerly side garden overlooking the green.

Basic renovations of the property are likely to cost a minimum of €150,000 but that won’t deliver much by way of sea views. To demolish and construct something that takes into account the magnificent setting will probably require anything from about €500,000 upwards.

An adventurous buyer with deep pockets could conjure up a one-off contemporary seafront home for the same money as a premium property on nearby Burrow Road.