Devin Toner sells up in Portobello for €895k 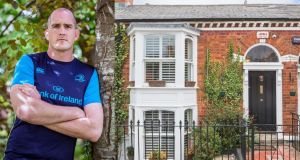 Rugby player Devin Toner and his wife, Mary, are on the move, following the sale of their Portobello home and recent purchase of a house in Mount Merrion.

The couple bought 9 Arnott Street in Portobello in 2013 for €398,000 when it required total refurbishment. They extended and renovated the property, creating what is now an attractive Victorian home with 132sq m (1,420sq ft) of interior space.

The Toners reportedly found a buyer off-market for the property but when the sale stalled, they opted to place it on the open market last month guiding €895,000 through Knight Frank. The property, which is in walk-in condition, was only briefly on the market before a buyer was found at the asking price and the sale closed in record time earlier this month.

Prior to the sale, the couple indicated that they would like the future owners of the house to allow them to stay and rent it for six months while they complete works on their new Mount Merrion home.

The couple spent over €750,000 buying a semi-detached house on Callary Road earlier this month, one day after selling their Portobello home. They now have plans to extend the property to the side and rear, convert the attic and make various energy efficiency improvements.

Toner is not the only sports star to have made a move this year. Retired rugby player Brian O’Driscoll got just under €1.4 million for his house at 1 Larchfield Road, Goatstown, in February.

O’Driscoll purchased the house in 2005, moving on from a smaller house nearby in Clonskeagh. Since then, he and his wife, actress Amy Huberman, extended and improved the property multiple times.

The couple moved on to Palmerston Road in Rathmines, where they acquired a period house for €1.8 million in 2016 and subsequently set about extending and renovating it.

‘I’m lonely during lockdown and looking for casual sex. How do I do that safely?’
5